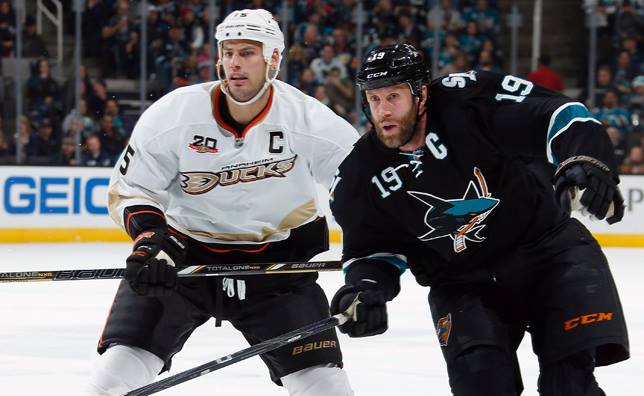 SAN JOSE—The Ducks fell apart against one of their biggest rivals. The Sharks scored two unanswered in the first to snap Anaheim’s lengthy winning streak at HP Pavilion Sunday night. The Sharks first and third lines helped the team close in on the Pacific Division lead.

With a loss against San Jose dating back to late November, the Ducks had much to worry about while they dominated through the league’s longest streak by any team this season. Their biggest challenge kept them from holding a record not seen by the Anaheim franchise. Both teams came out firing in the first, but the Sharks caught the big break of having home advantage and the advantage on their end.

Brent Burns took point by putting his team up in the first minute of the period. He scored with a wrist shot from the short side, as the puck traveled around the net to end up in front of goalie Frederik Andersen who scored his 12th of the season. Logan Couture recorded his eleventh on a breakaway backhander, decking out Andersen at the crease for a 2-0 lead midway into the first. The Ducks kept neck and neck with their adversaries, but the blocked shots by the San Jose defense were accumulating netminder Antti Niemi who saw little action from 14 shots by the visitors.

Anaheim was down, but not out with 40 minutes left to play. Aggressiveness in the offensive zone was limitless, as the Sharks maintained the defense in solid fashion. By the middle part of the game, the Sharks scored their third unanswered with left winger Bracken Kearns breaking through with his first NHL goal. The Sharks two-man play kept the Ducks defense busy up front while Bracken settled at center to receive the pass from teammate Andrew Desjardins to make his mark in what was his 8th game played in three seasons playing professional hockey.

The Ducks could see the light closing on their unbelievable success as the team lost the will to play. The game was coming to a conclusion and some players weren’t ready to throw in the towel. It took eleven and a half minutes for the Ducks to rely on their youth to come into play. First line left winger Patrick Maroon got Anaheim out of the whole with a pass from behind the net by Corey Perry; that gave Maroon the open shot on the stick side of Niemi for his third goal, and fifth of his career.

Maroon had something to feel great about, but the team felt otherwise down. The streak lasted a total of 23 days with nearly 6 of 10 on the road in back to back situations. The Sharks aren’t quite out of the picture, as the Ducks hope to return the hospitality from the Shark Tank and reciprocate the response on New Year’s Eve.