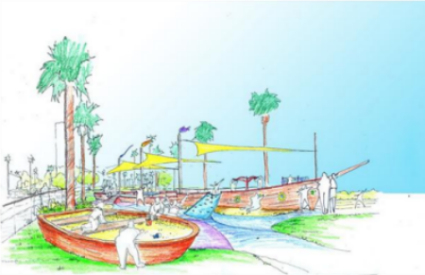 SANTA MONICA—On Tuesday, January 10, the Santa Monica City Council voted unanimously to direct designers to move forward with development of a proposed 20,000-square-foot multi-use playground that would be located near the city’s border with Venice Beach.

Councilmembers entertained designs of the playground, which will be built at South Beach Park, where a sand play area, picnic tables, a turf area and palm trees are currently located. The design has been tailored to accommodate able-bodied children, as well as those with physical limitations and learning disabilities. It has also been shaped according to community input.

The designers chose to have the playground follow a buried clipper ship theme to reflect Santa Monica’s history as a harbor and with amusement piers. Sea Colony One residents, whose condos directly face the beach and the project site, told city staff in December 2011 that the ship’s sails and masts would block their view of the coastline. The height of shade structures is being analyzed by the Recreation and Parks Commission to make sure this does not happen.

Katherine Spitz, the designer, told the council that these sails would shade most play structures to varying degrees during the hottest afternoon hours of the summer. The shade, which would move south after 4 p.m., would help protect the rubberized matting, meant to create the illusion of water, from getting too hot for children’s feet.

Additional features for children include a captain’s wheel, functioning periscopes, built-in water play features and concrete sea life on the sand play tables, the latter also in sandboxes, sensory wall features, swings, climbing nets, rolling bar slides and musical elements. These play components were specifically selected to respond to the community’s request that it help to develop children’s strength, balance, coordination, body awareness, and encourage their social exploration and play with others.

Karen Ginsberg, the new community and cultural services director, assured those in attendance that plans for music including a swirl and contrabass chimes have been reduced to drums that when played with hands are no louder than a conversation, traffic flow, or a sewing machine at work. Sea Colony residents, those closest to the project site, and those from Sea Colony One said they were concerned about extra noise associated with these elements and with additional children traveling to the area to enjoy the playground. They also asked, and the city consented, to have signs put up to describe to children how to play with equipment pieces in a safe and proper manner.

Other Sea Colony One concerns relate to the attractiveness of the playground to transients, who might use the ship area as shelter from the elements and hang their clothes on the 42-inch double chain-link fence that surrounds the area. And Sea Colony residents wanted the fencing taller than its current planned height. Ginsberg said research demonstrates that the area is not a homeless hot spot.

But the fence alleviates Sea Colony One residents’ concerns about children being hurt by bicyclists if they wander off toward a path to the west. The fence would keep them confined to the area and is meant to keep out transients and gang members after hours, when it could be locked.

An added component to the project could come in the form of Councilmember Bob Holbrook’s suggestion that children who try to reach the restroom by crossing the bicycle path could be protected from oncoming two-wheel traffic by having it rerouted away from the playground. Ginsberg said she will explore this option, though it will involve getting permission Los Angeles County, which owns the path. Mayor Pro Tempore Gleam Davis took issue with idea, remarking that this would just create a similar problem of endangering adults on the opposite side.