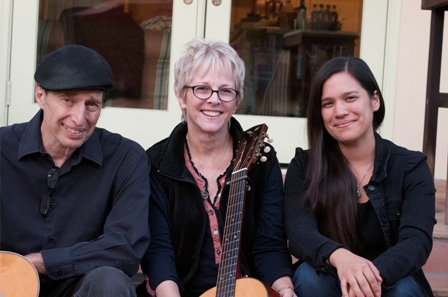 VENICE—Famed television writer and award winning singer/songwriter Tracy Newman is coming to The Talking Stick.  Newman who is a Los Angelesnative is an Emmy Award-winning TV writer who will visit the venue on Thursday, November 14, with new music, including old favorites like “Mama I Know You Ain’t Santa,” the holiday hit that caused Dolly Parton to shed tears.

Tracy got her start in music at an early age, but her passion to be a folk singer landed the songstress in therapy, while attending the University of Arizona. “I really almost never went to class. I didn’t bother to drop out either, so I got a whole semester of Fs. Not even Incompletes, I don’t think. When my mother saw that she freaked out, came to Arizona, dragged me back to LA and straight into therapy,” said Newman.

This transition placed Newman in television writing for some time, where she wrote on hit series like “Cheers” and won the coveted Emmy award in 1997 for her contribution to the ‘coming-out’ episode on the television series “Ellen.” Newman is also responsible for co-creating the ABC hit “According to Jim,” starring Jim Belushi, which ran for a total of eight season before going into syndication. Newman has no regrets regarding her stint in the TV comedy writing world saying, “I would never be able to successfully tell a story in 3 or 4 minutes (a typical song length,) if I hadn’t had the pressure to write 22 minute stories, (the length of a typical sitcom).”

Newman is also a founding member of the legendary Los Angeles improve company, The Groundlings. Her debut album “A Place in the Sun” was released in 2007 and the song “Waffle Boy’ won first place folk at the Indie International Songwriting Contest. Her second album, “I Just See You” includes “Fire up the Weed” which won the award for special music winner in the Great American Song Contest.

The time for the event begins at 8 p.m. and is asking for a $15 donation from patrons. Newman will have her band, The Reinforcements on hand, which includes Gene Lippmann on guitar, background vocal, Paula Fong on background vocal, John Cartwright on bass, Doug Knoll on drums and bluegrass singer/songwriter, Tom Corbett. The Talking Stick is located on 1411C Lincoln Blvd. in Venice, CA 90291.