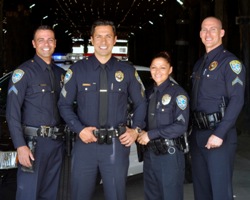 SANTA MONICA—The Santa Monica Police Department will participate in the national ‘Click It or Ticket’ campaign running from May 23 to June 5. The National Highway Traffic Safety Administration’s Click It or Ticket campaign is currently airing its paid advertising campaign, which runs from May 16-June 5.

The second half of the campaign is the law enforcement period which involves checking for the use of seat belts. The event promotes the usage of seat belts. The campaign is planned right before Memorial Day to help save lives since, Memorial Day is the busiest travel day of the year. During the time of the campaign, law enforcement officials will be stopping drivers and riders not wearing a seatbelt and ticketing them.

According to the National Highway Traffic Safety Administration’s website from 2010 to 2014, seat belts save an estimated 63,000. Research conducted by the NHTSA shows that while 88.5 percent of passenger vehicle occupants buckled up in 2015, almost 50 percent of occupants in fatal crashes nationwide are not restrained.

“It’s a simple idea that every driver and passenger should keep in mind: buckle up, every time,” said U.S. Transportation Secretary Anthony Foxx. “Putting on your seat belt is one of the easiest and safest choices you can make.” The website further states that, “57 percent of passenger vehicle occupants killed at night were not wearing their seat belts, compared to 41 percent killed during daytime.”

The NHTSA this year is partnering with the California Highway Patrol and law enforcement around the I-10, I-40, I-70 and I-80 corridors to bring “Coast to Coast” seat belt education. Statewide law enforcement will be joining the nationwide campaign to educate on the importance of seat belts.

“As law enforcement,we have a special role in helping protect the safety of our community,” said Chief Jacqueline Seabrooks of the Santa Monica Police Department. “Time after time, we see the tragic results that come from drivers and passengers refusing to wear a seat belt. Wearing a seat belt is one of the most important steps in increasing survivability in a crash. Our job is [to] stop those who are not buckled up and to keep them from repeating this potentially deadly mistake.”

For more information on the campaign visit www.nhtsa.gov/ciot.