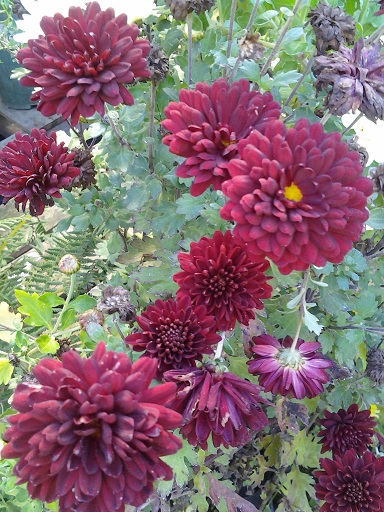 UNITED STATES—The coloring of foliage is a bit slow this autumn. The cooling nights after such warm weather is bringing some of the deciduous foliage down while it is barely yellowing. Honeylocust and black oak have already gotten notably sparse without much notable color. Hopefully, the more colorful sweetgum, flowering pear, pistache and gingko trees will retain their foliage later into cooler weather, so that they can put on a worthy show before filling compost piles.

It is probably slightly too early to clean gutters and downspouts. Unless the rainy season somehow starts first, this should probably wait until most of the foliage that is expected to fall has already fallen. Lawns, certain ground covers, decks and pavement should be raked as needed though. Decks and pavement can get stained from the tannins that leach from decomposing foliage. Lawn and ground cover do not like the shade under the debris.

However, slugs and snails really dig the mess. Fallen foliage keeps the ground cool, damp and shaded. Raking leaves does not eliminate slugs and snails, but inhibits their proliferation. There are always plenty of other hiding places. As the weather eventually gets cooler and damp, snails that stay out in the early morning should be collected and disposed of. Of course this technique is not convenient for everyone, since most snails hide before the sun comes up. Small slugs hide earlier in the morning and are even more unpleasant to handle.

Once found, neither slugs nor snails are too elusive . . . or fast. Yet, plucking and collecting them is not a fun job. Once collected, no one knows what to do with them. They can be put into plastic bags and disposed of; and will eventually succumb. Some people prefer to simply toss them onto a dry and sunny driveway or roof where they succumb more quickly and get taken by birds. Snails may need to be squashed to limit mobility.

Even though it is too late to prevent most types of weeds from dispersing their seed, a few types continue to disperse seed as they deteriorate through autumn and winter. Weeds in areas that get watered last longer and disperse their seed later than those without watering. Perennial weeds that are still green in dry areas will be easier to pull after the first rain.

Mild autumns and arid summers keep chrysanthemums on a different schedule here than in most other regions. They can get planted in spring to grow through summer and bloom through autumn; but because they can take a bit of work, they are more often planted while blooming in autumn. Although commonly grown as autumn annuals, they are perennials that can regenerate next spring, grow through summer, and bloom even better the following autumn.

Centuries of development in Japan have produced more varieties of chrysanthemums than can be documented. There are really some weird types grown for cut flowers or by hobbyists. Garden varieties are mostly limited to simpler flowers that do not need much thinning or staking. Color ranges through all sorts of hues and shades of yellow, orange, red, pink and bronze, as well as a few purplish colors, cream and white. Many have yellow centers. The aromatic foliage is alluring to some, but objectionable to others.