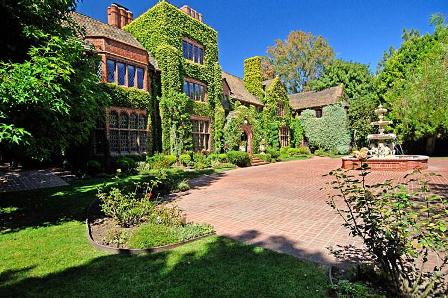 BEL AIR/LOS ANGELES—Squatters are moving into luxurious mansions in the Bel Air area that were foreclosed in the 2008 meltdown.  Foreclosed homes have become the tools of financial leverage for those gaming the system.

Once just a nineteenth century phenomenon, squatters are now returning to the American landscape.  However, this new breed of squatters use homes like ransom notes, demanding the bank pay them to leave.  This criminal activity has been dubbed “cash for keys” by some in the media, since the squatters will not relinquish the keys to a ransomed home until the banks pay cash.  Cash payments ensure anonymity and protection against government-imposed account freezes, easier after counter-terrorism reforms passed in the wake of 9/11.

In one such case, convicted squatter Gregory Russell moved into a foreclosed Bel Air mansion foreclosed by Gateway Bank.

Russell reportedly requested $25,000 from the bank before he would relocate.

Gateway Bank will pay squatters no more than $5,000 to move out.

NBC Los Angeles interviewed Russell, asking, “Have you ever asked anyone for money in order to move out of a foreclosed home?”

Russell replied, “No. I have never asked anybody for anything.”

Russell was convicted on misdemeanor charges, but authorities say that most squatters are never charged or convicted.

According to Deputy Los Angeles City Attorney Maureen Rodriguez, “This is a very difficult crime to investigate.  These are professional criminals. They educate themselves through the Internet, they know what properties are valuable, they know who’s paying cash for keys,” said Rodriquez in an interview with NBC.