UNITED STATES—The United States State Department has ordered key witness and U.S Ambassador to the European Union, Gordon Sondland to not appear at the deposition in the Ukraine controversy scheduled for Tuesday, October 8.

“I would love to send Ambassador Sondland, a really good man, and great American, to testify, but unfortunately, he would be testifying before a totally compromised Kangaroo Court, where Republican’s rights have been taken away, and true facts are not allowed out for the public to see. Importantly, Ambassador Sondland’s Tweet, which few, report, stated, “I believe you are incorrect about President Trump’s Intentions. The President has been crystal clear: no quid quo’s of any kind. That, says it all!”

Speaker of the House Nancy Pelosi and Democrats in Congress have been pushing the impeachment proceedings along with a sense of urgency, while Republicans including Kevin McCarthy (R-CA) publicly called for Congress to follow proper impeachment procedures, in a recent interview with Fox News.

“Think about if you went through a trial, but you weren’t allowed to call any witnesses.  That’s what Speaker Pelosi is doing to President Trump right now,” said McCarthy in a tweet. 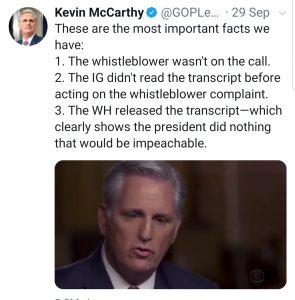 Fox News interviewed Republican Political Consultant, and former Senior Advisor and Deputy Chief of Staff under George W. Bush, and close friend to Ambassador Sondland, Karl Rove.  Rove indicated he was surprised that Democrats requested documentation from the Ambassador on September 27, due within three days on October 2.

Rove also criticized House Intelligence Committee Chairman Adam Schiff, and Democrats saying that unless the impeachment is done properly, it is just a made for TV drama.

Schiff, who was interviewed by CNN indicated he sees the blocking of Ambassador Sondland’s testimony to be considered a further act of obstruction by Congress.