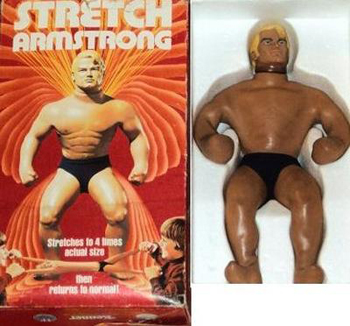 BEVERLY HILLS—Film studio Relativity Media, in partnership with toymaker Hasbro, Inc., announced on Monday, January 30, it will produce a live-action film based on Stretch Armstrong, a popular action hero figure launched in the 1970s. It’s not clear who will play the title character as Tyler Lautner from the “Twilight” franchise was expected to be the star when Universal Pictures was involved in the project but has since pulled out. The film is expected to be released on April 11, 2014.

According to a news release announcing, Relativity will be the distributor of the film in the United States while the studios network of foreign output partners will release the film internationally. Relativity CEO Ryan Kavanaugh, Hasbro President and CEO Brian Goldner and Bennett Schneir, Senior Vice President and Managing Director for Motion Pictures will be producing the film.  Relativity Co-President Tucker Tooley will be the executive producer.

Beginning in 2007, Hasbro began creating movies and television shows based on its popular toys and board games. The first two products Hasbro spun into films were “Transformers” and “G.I. Joe,” which have become franchises and have grossed nearly $3 billion at the worldwide box office to date. Hasbro’s upcoming releases include “Battleship” with partner Universal Pictures in April and “G.I. Joe: Retaliation” coming in June with Paramount Pictures as its partner. Hasbro also has made its mark on television, as it currently produces “Transformers Prime” and “My Little Pony: Friendship is Magic” which can be seen on the HUB television network in the U.S. and in more than 140 countries around the world.

Stretch Armstrong is an action hero figure who was first introduced by Hasbro in 1976 and re-launched in the ’90s. The toy was sold successfully throughout North America and in markets across the world. Stretch in his original form had a unique design that was different from traditional action figures, as he could be stretched over and over and always returned back to his original size. The toy is considered rare and a collectible to this day.

Tooley said in a statement how happy he was that Relativity would be working with Hasbro.

“We are absolutely thrilled to partner with Hasbro, a company whose global reach and ability to innovate has made them immensely successful in the arena of brand re-imagination”“ as evidenced by their legacy of creating such franchises as Transformers and G.I. Joe,” said Tooley, “We look forward to bringing Stretch Armstrong to audiences worldwide.”