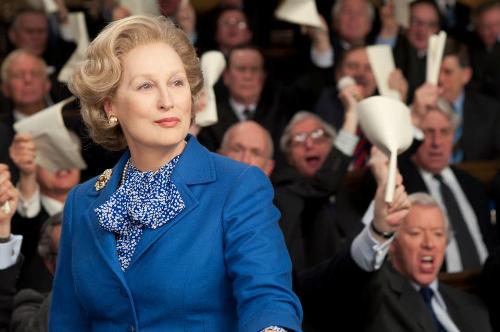 Watching her performance in the film will mesmerize the spectator in a way that is haunting to describe with words.  There is honesty in the performance; it doesn’t come off as an impersonation or caricature.  When you see Thatcher on the screen you absolutely believe it’s her and not her counterpart Streep.  With the portrayal of any real life person, the audience’s perception will always focus on the “look;” whether the actor or actress fits the part.  Next, they will begin to examine the mannerisms that have become synonymous with that figure.  Lastly, the voice of that icon is proliferating to the performance.

For those who aren’t aware of the history behind Thatcher’s legacy, she was the first female British Prime Minister and the longest serving of the 20th century, serving for 11 years.  It was important to her to serve her country and the people who elected her.  Thatcher is a layered character and the film explores those boundaries of this powerful woman in flashbacks as she chronicles her rise to the top and her current state.

When the movie opens, the audience sees Thatcher carrying on a conversation with her husband Denis (Jim Broadbent).  We soon discover that Denis passed away years ago and Margaret is suffering from dementia.  She was a determined woman, with aspirations to inspire the people around her and to change their way of thinking.  The linear timeline of the movie bounces from the present to past.  That structure disrupts a cohesive story to keep the audience engaged through the entire film, but Streep’s performance is so commanding, bold and daring viewer’s will not be able to ignore it.

There are two marvelous scenes in the biopic that resonated with me.  In one particular scene, she attempts to gain the attention of her cabinet which is completely male dominated.  At first it appears she is being ignored by her peers and there is this suspense eagerly building for the viewer.  Will she command respect from her peers or continue to go ignored.  In that scene, Meryl demonstrates authority and charisma through woman who eagerly wants to be heard without disrupting the current proceedings.

Its important to point out that the film takes notice to Thatcher’s fractured relationship with her daughter Carol (Olivia Coleman) who seems to get underneath her mother’s skin, similar to what Thatcher’s own mother did to her.  There is a complexity to “The Iron Lady” that only Streep could maintain.  Bold at times, distraught at others and ferocious when the time is right.  Audiences will thoroughly enjoy that scene where she goes on a rant while pointing fingers at her Cabinet.  She insults a colleague with intensity it hurts to watch as a viewer; her words border between malicious and insulting.

“The Iron Lady’ is not at all a perfect movie; there are hiccups throughout the picture.  The movie does present a universal theme all of us can relate to: loneliness.  The lost of a true love can be devastating on any person’s psyche as with Thatcher.  Streep gives a performance of a lifetime that is not an imitation of a historical figure; it’s not a caricature of her either.  The audience will undoubtedly believe Margaret Thatcher is on the screen, and that my friend is a testament to fantastic acting, and we’ll enjoy it with absolute giddiness.