Perry High School students were celebrating spirit weeks where students showed love of their country by dressing patriotically on, “Party in the USA” day. Eight students who were wearing clothing supporting President Donald Trump’s slogan “Make America Great Again” and carrying a Trump flag where taking pictures when they were approached by the school’s resource officer.

Several students reported to CBS News during live footage that the student resource officer approached the students and said, “We would like you to remove your mordant merchandise and get off of the campus”

Logan Jones indicated the officer singled her out saying, “Hey Darlin’ what’s your name?”  Jones replied “Why do you need my name? We’re leaving. We’re going off campus. I’m doing what you just told us to do.” Jones called her mother and waited to speak to school officials. She was suspended for 10 days for being defiant. “We just wore all like the America stuff we had, student Morgan Dupius said.  “Obviously, Trump’s the President so we wore Trump stuff because he’s the leader of the country,” Dupius added.

Jennifer Farris, the mother of another student, Tori Farris came to the school and asked why her daughter was asked to remove her sweatshirt and said that the resource officer was taking pictures of her.

“I think this is censorship at its finest when it comes to the schools. They cannot put on “USA Day” and not expect the kids to support their President,” Farris told CBS News.

Canyon News reached out to school officials which is technically part of Chandler Unified School District, where Principal Dan Serrano released the following statement below. 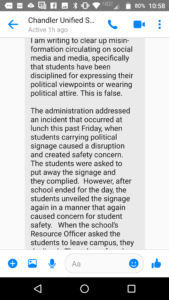 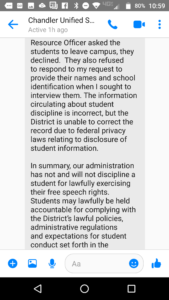 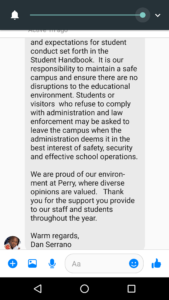