SHERMAN OAKS—A woman at a Sherman Oaks restaurant was caught on camera stealing a wallet from another patron back in January 2020. Authorities released details about the incident on Friday, March 6.

The victim and her two daughters were dining at a restaurant when another woman from behind sat down on January 14. According to security footage, the woman reached into the victim’s purse twice, but pulled back. She placed her jacket over her arm and took the victim’s wallet and placed it into her purse. The victim’s wallet contained her son’s wedding band and engagement rings. 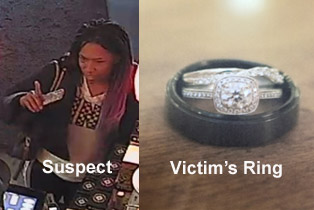 The suspect was caught on camera using the victim’s credit cards at Macy’s, Target and Best Buy in Northridge, Pacoima and Van Nuys. Officials believe the suspect was wearing the stolen rings when she made her purchases.

According to surveillance footage, the suspect is an African-American woman with her hair half-dyed pink and in braids. She is between the age of 25-35 and was wearing a light-colored shirt with letters and dark pants on the day of the incident.

Anyone with information regarding the incident or who is aware of the suspect’s whereabouts is asked to contact theft detectives at the Los Angeles Police Department Van Nuys Division at (818) 374-9500.