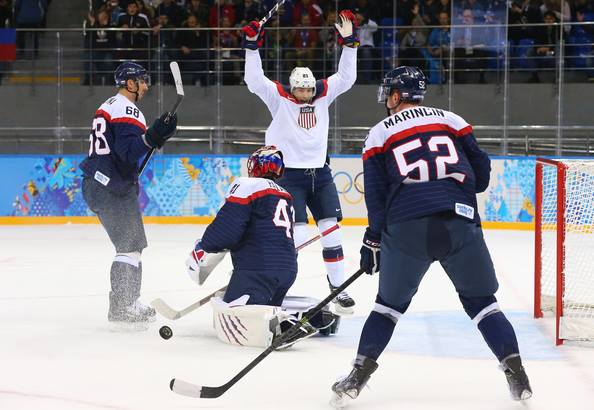 SOCHI, RUSSIA—A crushing victory went far better than the United Stateshad imagined. Phil Kessel and Paul Stastny scored a pair of goals each in a 7-1 rout of Slovakia in the Men’s Preliminary Round of Group A on Thursday night.

The US men’s Olympic hockey team got underway in their opening round matchup against Slovakia who has a sizable lineup with Captain Zdeno Chara leading the European team. US goaltender Jonathan Quick got his first start for Team USA in the Olympics as Coach Dan Bylsma chose to start with the Los Angeles Kings netminder rather than go with Ryan Miller who played the most matches in the 2010 Olympics in Vancouver.

Quick’s start in the first period was a strong one, holding shots from Tomas Jurco and Tomas Kopecky early in the opening minutes. The American went after Slovakia goaltender Jaroslav Halak with five shots, but none that found the back of the net.

Midway into the period is where Team USA grabbed their first chance to go on the power play in an attempt to set the scoring pace. Halak saw three shots from the Americans, but giving up a goal was not on his agenda. TeamUSA came with the heat with Phil Kessel dropping the puck back to teammate John Carlson who drove the puck over the shoulder of Halak for a 1-0 lead.Slovakia answered back with a shot from Michal Handzus, but Quick and theUSA defense fought out the adversity and moved back into the offensive motions. After 20 minutes, the Americans took eight scoring chances having shot 11 times on net with Slovakia recording four.

The Americans started the second period with a bad mistake as Ryan Suter cleared the puck out for Marian Hossa to make the interception. Looking back at the play showed that Hossa was offside and that the referee should have blown the play dead. Instead he made the pass to Tomas Tatar to tie the game. Team USA put the score back in their favor as Ryan Kesler scored a high shot on the slot for his first of the tournament. Paul Stastny added his name to the scoring list as Max Pacioretty made the cross pass to his teammate to gain a two-goal margin on Slovakia.

The game only got better for the United States as Kessel scored on a scuffle with the puck that he shot behind the back to put his team up three goals. Stasty scored his second of the game from a pass by Kevin Shattenkirk seven minutes into the period. Montreal goalie Peter Budaj took over for Halak in net, hoping to keep the score from growing any bigger. Luck would only find its way with the US as they scored their sixth goal on a late shift bySlovakia where James van Riemsdyk gave a pass to Kessel to give the Toronto Maple Leaf a pair of goals. Dustin Brown made it 7-1 on a centering shot out front, to give the forward credit for Slovakia’s sixth unanswered to Team USA. They ended the period outshooting Slovakia 27-17 with two-thirds of their scoring chances ending behind the opposing goaltenders.

The third period was 20 minutes that the Slovakian national team members wanted to end quickly. The Americans took six shots on goal, making little effort to decimate Slovakia any further than they had. “We found our game in the second and had a great stretch where we buried a few pucks and in the third a six-goal difference makes a big change in the game,” said David Backes. Quick made 22 saves in his first Olympic victory, giving him a great start to keep the number one spot for the US as they meet Russia on Saturday.