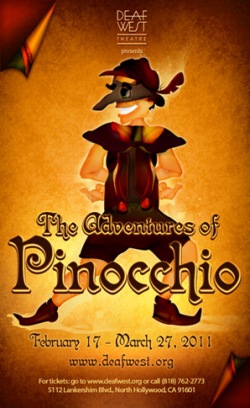 WHAT:
“The Adventures of Pinocchio” ”“ Kicking off its 20th Anniversary, Deaf West Theatre puts its own, unique spin on the classic story of a mischievous puppet who wishes to become a real, live boy. Tony Award winner Lee Hall (Billy Elliott’s) adaptation (2000) is steeped in the Italian tradition of commedia dell’arte – a form of physical comedy that lends itself perfectly to Deaf West Theatre’s signature, award-winning combination of signed and voiced theater. Brimming with clever political subtext and sly social commentary, this comic production will appeal to all ages. (“The Adventures of Pinocchio” is rated PG for mild language and dark themes ”“ recommended for ages 10+).