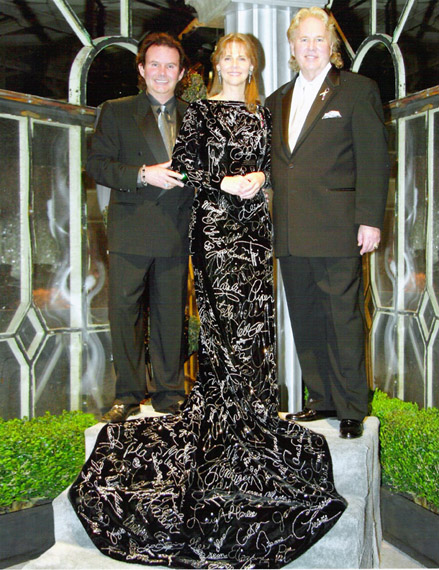 HOLLYWOOD —The Hollywood Graffiti Gown contains over 400 names of the most influential females in a variety of professions, including Bette Davis, Rita Hayworth, Carol Channing, Elizabeth Taylor, Halle Berry, Cate Blanchett, Mother Teresa and the cast from “Desperate Housewives” among others. Currently the gown is being displayed at the Hollywood Museum in a specially designed glass case so guests can view it in its entirety. In addition, McLaughlin also has on display the red dress worn by Joan Collins on the cover of Playboy Magazine, a salute to “The Price Is Right” with nine black and silver evening gowns in the exhibit and a period piece worn by legendary star of Phantom of the Opera, Dale Kristien. “I’m honored to have these gowns on display at the Hollywood Museum” states McLaughlin. The upcoming event will also serve as a precursor to the upcoming release of his book “The Glamour Kings of Hollywood.”

The creation of the Graffiti Gown was an inspirational idea McLaughlin had in 1980. It was a vision that came together when McLaughlin’s partner, Jerry Skeels (1939-2007), designed the dress out of German black velvet while McLaughlin hand-beaded the signatures made up of bugle, seed and platinum beads. JERAN Design was a leader in fashion design in the ’80s and ’90s, having designed for motion pictures, stage and television, having worked on such hit TV shows as “The Bold and the Beautiful,” “The Young and the Restless,” “Star Search,” and 22 years with “The Price Is Right.” Both Skeels and McLaughlin have been EMMYÂ® nominated for best design and are recipients of the United Nations International Spirit Award. Since Skeels passed away in 2007, McLaughlin has devoted his time preserving the JERAN legacy and the Graffiti Gown, which is to raise AIDS awareness and to donate 100 percent of its proceeds to benefit AIDS causes. JERAN’s gown will be on display until November 28 where Heritage Auction House in Beverly Hills will pick it up. The galleries auction event for the gown will take place in the first quarter of 2011 with a starting bid of one million dollars. McLaughlin hopes the gown will eventually find its way to the Smithsonian Institution.

The Hollywood Museum (thehollywoodmuseum.com), is the official museum of Hollywood and boasts 35,000 square feet, 4 floors of breathtaking exhibits and the home of more than 10,000 REAL Showbiz Treasures: Costumes from “Twilight: New Moon,” “Star Trek,” “Transformers: Revenge of the Fallen,” “The Hurt Locker,” “Inglourious Basterds,” “The Blind Side,” “High School Musical 2” and more. The Hollywood Museum is housed in the world famous historic Max Factor Building, where Max Factor, wizard of movie make-up worked his magic on motion picture stars since 1935. The lobby, has been restored to its original grandeur.

The Hollywood History Museum’s event will be on Thursday, May 6, at 6 p.m. and is not open to the public.