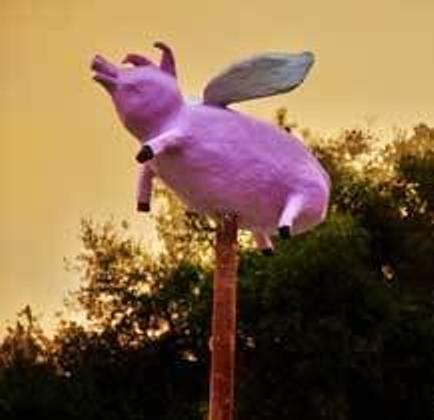 The Flying Pig was a landmark of the Topanga community, and its absence was noticed by the Santa Monica Mountain denizens.

According to Flavia Potenza, a reporter of the Canyon Chronicle, the community sent e-mails to the owners of the flying sow, Dan and Lisa Ward, and attempted to start a GoFundMe campaign to replace the sculpture before the original artist could be given a commission to re-create the work.

Chris Budzin, a recognized artist of Road Side Architecture and the artist behind the Flying Pig sculpture, returned to Topanga to replace the swine with added security. Budzin and his friends secured the pig on to a large pole overhanging the roadside, making it difficult to remove, and less susceptible to being stolen in the future.

Lisa Ward told the Canyon Chronicle, “Our property goes down to the Boulevard. We decided to hang it there because the community helped us so much when our son Teddy was injured years ago. It already belonged to the community, not us, and we knew how important it is to the neighborhood. Sharing the pig is part of the pleasure.”