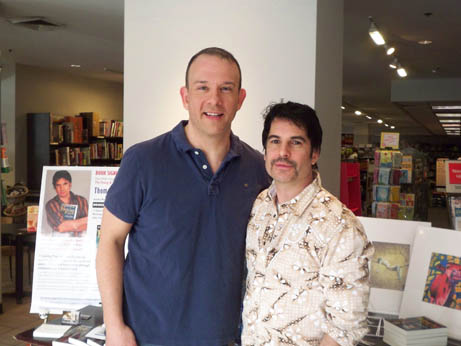 WEST HOLLYWOOD —Handsome artist, author and actor Thom Bierdz spent last weekend in Washington D.C. spreading the word of equality for all. The talented star of the CBS mega hit series “The Young and the Restless” was asked to attend and do a live painting which was auctioned off to support OUT for Work on Saturday, March 6, at Mova Lounge (formerly Halo) at 1435 P Street NW, Washington, D.C.

Bierdz also performed reading selections from his award-winning autobiography “Forgiving Troy” followed by Q&A on Sunday afternoon at Books a Million in Dupont Circle. Bierdz is the only openly gay actor to play an openly gay character (Phillip Chancellor III) on CBS’s “The Young and the Restless,” daytime’s number one drama. Last year, Bierdz received the Human Rights Award for his visibility and efforts to end discrimination. The live painting event will raise funds for Out for Work.

Thom took a friend to Washington who has just become an American citizen. They were given a private tour of the U.S. Capitol building by Jim Brandell, the chief of staff to Michigan Congressman Dave Camp. Bierdz had lines of people at the Books a Million store who purchased copies of his autobiography and chatted with the author while he signed copies of the tome. The trip was very inspiring to Thom, he pointed out that it was his first trip, but maybe not his last. When asked if he would consider going into politics. The talented star smiled and said, “I wouldn’t rule it out. If I could make a difference and help others, which is my mission in life, I’d be open to it.”

Bierdz stayed at the famed Mayflower hotel in D.C. and loved it. “The staff were so gracious and the rooms are beautiful. It’s a grand hotel,” added Thom. “I was most impressed by the design of the city, and the supporting architecture. It rivals Paris in my opinion. I find D.C. so beautiful.” Shrugging off the fact that many fans came from all over the east coast to meet the star for the first time. He did admit, “My book editor, Wil Purdue, took the train from Baltimore to come spend the day with us and he also did the tour as well,” said Thom Bierdz. Ran Burge with Out Performance Marketing coordinated the entire trip for Thom and did a wonderful job at it. Ran Burge can be reached at ran@outpmarketing.com.The activist and actor concluded, “Overall it was a wonderful event, Tommy. I look forward to doing more in the future. The mission for equality is just as important if not more so in our country, because we were founded on those principles.”