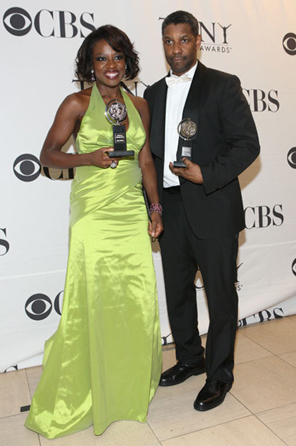 NEW YORK—There is no experience quite like theater; there’s a certain magic that you get from watching thespians perform on the stage. On Sunday, June 13, the 64th Annual Tony Awards took place at the famed Radio City Music Hall honoring the best on Broadway with “Fela!” and “La Cage aux Folles” leading the pack with 11 nominations apiece. The night’s big winner was the play “Red,” which walked away with six awards including best play. In the best musical category, “ Memphis” took the top prize.

Sean Hayes best known for his work on NBC’s “Will and Grace” helmed hosting duties and was also nominated in the category for Best Performance by an Actor in a Musical for “Promises, Promises,” but lost the award to Douglas Hodge for “La Cage aux Folles.”

A stunned and exuberant Catherine Zeta-Jones accepted the award for Best Performance by an Actress in a Musical for “A Little Night Music.” Jones was overwhelmed when giving her acceptance speech and got a huge laugh from the audience when she pointed to her husband Michael Douglas and shouted to the audience “He’s a movie star and I get to sleep with him every night!” It was just one of the many memorable moments at the ceremony. Hayes delivered an unforgettable kiss with actress Kristin Chenoweth, and the comedic humor from actors Nathan Lane and Bebe Neuwirth as they announced the winners for actress and actor in a musical was sharp and witty (considering both were overlooked in the category).

Hollywood royalty was definitely highlighted during the ceremony. Both Will Smith and wife Jada Pinkett-Smith were in attendance as producers for the play “Fela,” even in a rare public appearance, viewers caught a glimpse of power couple Beyonce Knowles and her husband Jay-Z. Hollywood starlet Scarlet Johansson won for Best Performance by a Featured Actor in a play for “A View From the Bridge” and she thanked her “Canadian husband” Ryan Reynolds while accepting her award.

Two-time Oscar winner Denzel Washington accepted his first ever Tony Award for Best Performance by a Leading Actor in a Play for his riveting performance in the play “Fences.” While his co-star Viola Davis walked away with the Best Actress in a Play award. To everyone in Hollywood who hasn’t already heard of the name Viola Davis please take note; this woman is a force to be reckoned with in front of the camera and she is captivating to watch on stage or on film. “Fences” also walked away with the award for Best Revival of a Play and “La Cage aux Folles” won for Best Revival of a Musical.

Another great moment at the show involved two of the stars from television’s break-out comedy “Glee.” Both Matthew Morrison and Lea Michele took the stage to belt out a few songs. Morrison hit the stage complete with choreography as he performed “All I Need is The Girl” and Michelle performed “Don’t Rain on My Parade,” the same showstopper she performed on “Glee.” I thought her performance at the Tony’s was sensational as she serenaded co-star Jonathan Groff, as well as Hollywood super-couples Will and Jada Pinkett-Smith and Beyonce and Jay-Z. Michele is a star in the making and hasn’t even hit her pinnacle yet; “Glee” is only the beginning for the Broadway star.

This year’s Tony Awards will go down in history in my eyes as a memorable ceremony full of great moments and surprises. It reminds you as to why theater is such a fascinating experience unlink television or movies, it engages the audience in a way those other forms of entertainment, just can’t do. The audience member is apart of the magic. Can’t wait to see who shines at the 2011 Tony Awards!