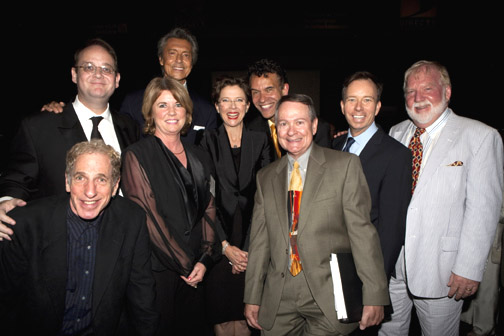 BEL AIR—As the theatrical community of NY gathered on the Great White Way to celebrate their own for the 2010 TONY AWARDSÂ®, the Los Angeles thespian society congregated 3000 miles away to cheer their colleagues via a LIVE feed, courtesy of Direct TV, as The Actors Fund and host Tommy Tune honored TONY Award-winner Brian Stokes Mitchell at their 14th Annual Tony AwardsÂ® Party with the Julie Harris Award. Former High School chum and dance partner Annette Bening presented the award in recognition of not only Stokes theatrical accomplishments, but also his leadership as Chairman of the Board of The Actors Fund. The gala, which included a memorable performance of “You Made Me Love You” by Lorna Luft dedicated to the evening’s honoree, was produced and written by Marc Cherry and David Rambo.

Brian Stokes Mitchell has enjoyed a rich and varied career on Broadway, television, film, voice-overs and recording, along with appearances in the great American concert halls. His Broadway career includes performances in “Man of La Mancha,” “Kiss Me, Kate,” “Ragtime,” “King Hedley II” and “Mail,” which earned him a Theatre World award for Outstanding Broadway Debut. His long television career began with a seven-year stint on “Trapper John, MD.” Numerous film and TV appearances include “Ugly Betty,” “One Last Thing,” recurring roles on “Crossing Jordan” and “Frasier,” PBS’ “Great Performances,” DreamWorks’ “The Prince of Egypt,” “South Pacific” at Carnegie Hall, and his Presidential Debut in “The Singer and the Song from the White House.” Stokes, as Ms. Bening called him, fondly recalled how Annette also presented his category for his first TONY nomination for the role of Coalhouse Walker, Jr. in the 1998 production of “Ragtime.” “It seemed so perfect to have my High School friend presenting ”¦ such a good omen. I remember as the camera with the little red light moved in on me sitting there as she began to announce – And the TONY goes to ”¦ someone else.” Of course, he didn’t have long to wait before he too received his own TONY for his performance as Petruchio in the 1999 production of “Kiss Me Kate.”

THE ACTORS FUND is a nationwide human services organization that helps all professionals in performing arts and entertainment. The Fund is a safety net, providing programs and services for those who are in need, crisis or transition. Learn more about The Actors Fund at www.actorsfund.org.