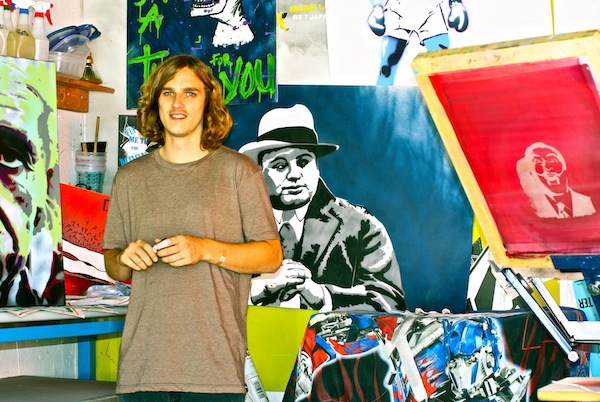 HOLLYWOOD—HELLO AMERICA! Even though many people are labeling this current group of youngsters as the truly “lost” generation, somehow it manages to erupt with some of the most interesting and exciting groups of artists ever. Their perception of people and the topsy-turvy world they have to survive in, leaves one breathless. Trevor Miller aptly represents this tribe of brilliant young artists who are not afraid to express “truth.”

Q:  As a youngster discovering arts of all kinds, what artist or art affected you the most?

A: “Primarily, it was surf and skateboard art, which had the biggest impact. Every time I got my mom to take me to the skate shop, I would study the wall of skate decks looking at each graphic. The great part about skateboarding is that music and art are such a huge part of [its] culture. All of the ad campaigns and videos exposed me to so much creativity I probably never would have found otherwise. The Misfits and other older punk rock bands were a big influence at the time, and guys like Blek Le Rat and JeremyFish definitely stood out.”

Q:  Did it affect you in a way that forced you to need more discovery?  What was the subject of your first drawing or painting that was really representative of who you were at the time?

A: “In a way I guess, I’ve always been aware of the design process that goes into something, whether it’s graphic or industrial, so I’ve always felt more surrounded than forced into finding new things. When I got into high school, I started to draw and paint more, but I never really took any art classes at school, I always just wanted to do it myself. I started to make stencils because I liked trying to figure out how to create an image that looked more complex than it really was and you could spray over and over again. The first stencils were of grenades, or skulls, there was a portrait of Marilyn Monroe. I sprayed them all over the garage floor and walls and pissed my parents off, but that was the spirit of it, being a little hell raiser and questioning everything.”

Q: How did you see the world at the time, and how has that perception changed?  Did the possible changing view, affect how you painted and influenced who and what you needed to paint?

A: “Back then, I was younger and I thought I already knew everything, and I was invincible. I’ve always liked the imagery of that recklessness; my first serious paintings were about trying to capture that. As you get older you learn how big the world actually is, and different things start to become more important. Now I think there’s a bigger picture behind everything I paint or draw, but it’s still the same influences and interests fueling everything.”

Q: What have you discovered about yourself as a painter?  Has it made you more self-examining?

A: “I’ve discovered more about the world than myself as a painter, and in-turn, I think that’s made me more self-examining, finding where I fit or where I want to fit in the world.”

Q: Your current paintings include that of Billie Holiday and Muhammad Ali. Is there something about these two legendary personalities that stood out more than other celebrities, forcing you to put them on canvas?

A: “I want people to think about their equivalents today. Who would they consider the Muhammad Ali or Billie Holiday of our time? And would they do these two justice? It’s about questioning genuineness because, sometimes, it’s hard to tell if we’re still headed in the right direction.”

Q: Do you consider yourself very sensitive to all the trials, tribulations and the madness that we’re experiencing in our country, as well as the world, today?  Has it affected the way you draw or paint?

A: “Yeah, I’m sensitive to everything that’s going on; I definitely have heavy opinions though. As far as art goes, I feel like, there’s a big bag of world issues you can choose to address, and I try to stay away from the frequently used ones. It doesn’t really affect the way that I draw or paint, though, I don’t think anybody is really unaware of the madness going on.”

Q: As of now, who are the painters who have affected you the most in your kind of art?

A: “There are so many people I’m interested in, [and] so many different mediums; they come from all over the place. Banksy and Shepard Faireyhave definitely had an impact just showing what’s possible with street art.Logan Hicks is an insane stencil artist. I also like the crazier guys like Dave Choe and Ralph Steadman.”

Q: Does music or what you see in the theater influence your subject matter?  If so, what and why?

A: “Yeah, music especially. Music resonates visually in people’s heads. A song can make you feel a certain way and that creates imagery. The colors I use or the way I arrange the composition have a lot to do with the music I’m listening to while I paint. And film is always a good judgment of where people are. It gauges what’s prevalent and how things are being perceived. To a certain degree, it’s a medium that influences what I paint just because its such a strong force that reaches everybody.”

Q:  Considering all the experience you’ve had, so far, are you closer to understanding who you really are?  And is that disturbing?

A: “Yeah, I’ve always known who I am, though, and been comfortable with that. I think the more experience I get, the more I learn about who I can be not who I am now. It’s more about growth, and that’s what the experience is—mileage. I’m still really young; too young to be disturbed by myself.”