UNITED STATES—The jury trial of British-born socialite, Ghislaine Maxwell began on November 29, and is expected to last for at least six weeks. She was arrested and taken into custody on July 2, 2019.

“The indictment unsealed today alleges that between at least about 1994-1997 Maxwell and co-conspirator, Jeffrey Epstein exploited girls as young as 14, including by enticing them to travel for the purpose of engaging in sex acts,” indicated the U.S. Department of Justice.

FBI Assistant Director in Charge, William Sweeney Jr., stated, “Ms. Maxwell chose to blatantly disregard the law using whatever means she had at her disposal to lure vulnerable youth into behavior they never should have been exposed to.”

On December 2, the housekeeper for Jeffrey Epstein testified regarding the “see nothing say nothing” policy when Maxwell moved into Epstein’s home. She reported seeing lingerie and sex toys.

The first of four victims to testify went by the name of Jane, indicating that she met Epstein and Maxwell at Interlochen Center for the Arts.

Previous testimony indicates that Epstein and Maxwell approached the victim while she was at picnic tables there with friends for summer camp.

According to reports, Epstein and Maxwell had ties to Interlochen Center for Arts, located at Interlochen, Michigan. The couple frequented a lodge on campus. 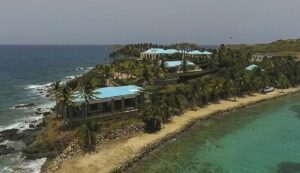 The pilot confirmed that he had seen “Jane,” on the flights, referring to her, “piercing powder blue eyes.” Visoski reiterated that some of the flights came into Traverse City, Michigan, the closest airport to Interlochen School of the Arts.

The second victim went by the name of “Kate.”  She testified that Maxwell, was in the room when Epstein requested a message from the then 17-year-old. Kate relayed that Maxwell asked her “if she had fun?”  Maxwell reportedly praised the victim saying, “you are such a good girl.”

The third victim used the alias, “Carolyn.”  She told the court she was encouraged to bring other young girls with her and was paid well when she did. She was 14 at the time. At 18, the victim was only being used to recruit others, as she was too old.

The fourth victim, Annie Farmer, testified on Friday, December 10 telling the court that her abuse began at the age of 16.  She reported that Maxwell herself had given Farmer a breast massage.

According to reports, the parents of the Farmer corroborated with the testimony of their daughter.

After 10 days in court, and the testimony of Annie Farmer, the prosecution rest.

"The pilot logged 26 flights with Clinton on Epsteins jet."
https://t.co/fxFEhsAMbd