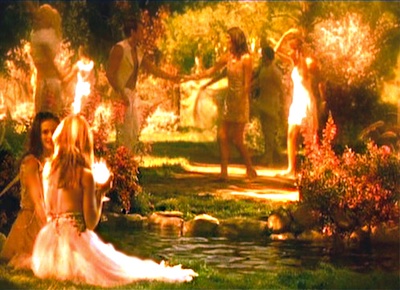 HOLLYWOOD—On Sunday night, the latest episode of “True Blood” was titled “Everything is Broken.” However, the only thing missing on the action-packed episode was werewolf Alcide. “Where was Alcide in the middle of all of this great drama?” said Sherman Oaks resident Wendy Fujimori. “The actor is great in the role, and Sookie needed him, almost as much as we viewers need to see him.” Starting off the night, Russell, the King of Mississippi, showed up at his mansion to find his centuries-long lover Talbot staked and murdered by the Viking vampire Eric Northman, who has been harboring a grudge against the king for nearly a 1000 years.

Truebie Rene Thurston tells Canyon News, “With only three episodes left, I hope they don’t leave us hanging on what Sookie really is!” Because Bill previously ingested so much of Sookie’s blood, he was able to enter the mysterious world that she visited while in a coma two weeks ago. Bill met up with Claudia, the mystery lady who was able to stop Bill from biting her. She had hit him with a light emitting from her fingertips, just like Sookie used to stop Cooter from attacking her. Bill and Eric are so far the only characters who know Sookie Stackhouse’s true identity. She doesn’t even know herself. Whatever it is, Russell plans on using her powers to destroy humans and now vampires after his lover was killed.

With the ratification of the Vampire Rights Amendment at hand, Nan Flanagan (Jessica Tuck), detoured to Fangtasia to confront Eric about the Magister’s disappearance. Eric managed to convince Nan and the Authority that it was indeed Russell who murdered the Magister and also killed his family years ago. Nan gave Eric the Authority’s blessing to murder the King, but not before he poured his heart out to Pam. The scenes between Eric and Pam were magical, and filled with such great acting.

Jason received unexpected help as he went up against Felton (James Harvey Ward) and Calvin (Gregory Sporleder). Not only did Andy agree to help him, but Sam unwittingly got into a fight with Crystal’s father, leaving him almost dead, and Felton attacked a deputy leaving him almost dead as well. Felton knows Sam is a shifter, and it places Sam and his brother Tommy in grave danger. What Crystal and her family are has yet to be revealed to viewers, but everyone knows it will not be a positive revelation for our favorite residents of Bon Temps, La.

Tara encountered a psychotic Franklin outside of Merlotte’s Bar. He began to strangle the life out of her, just as Jason arrived to save her from the menacing undead. Jason was able to shoot and kill Franklin with a wooden bullet. At least one viewer was not too happy at the demise of Franklin. “Tommy, I know Franklin was a ruthless, psychotic vampire, but a part of me was a bit sad that Jason ended his tirade so quickly. I didn’t want Tara to be brutalized, but Franklin could have been fun in the right circumstances,” said Truebie Rene.

As the episode came to an end, Russell attacked a national newscaster while he was giving the news to a national audience about the possible new amendment to the U.S. Constitution legitimizing vampires, since they claim they no longer need human blood to survive. King Russell pulled the spine out of the journalist and went on an almost unbelievable speech about vampires being as narcissistic as humans, creating wars just like humans, destroying our planet and he vowed that vampires would again eat humans, starting with their children. “True Blood” viewer Wendy tells Canyon News, “It was amazing to listen to. Similar to what we’ve heard for almost a decade now in politics. Rene summed it up by saying, “If loving Russell Edgington is wrong, I don’t want to be right. His tirade on national television against the VRA was fabulous, and the wonderful ending with ”˜now the weather, Tiffany?’ was just too delicious.”

Truebie Jeff Dean in Melbourne was blown away by the intensity of the final scene of the night. Jeff tells Canyon News, “I just watched ”˜True Blood.’ The end blew me away. I did not see that coming. I don’t want to sound like a fan, but I will say that I truly think that final scene of the speech by the King of Mississippi followed by the throw to the weather girl simply must be an Emmy award-winner. You have to pull out all the stops to make sure it’s voted a winner. I loved it.”

Reader Bobby Head did not feel the way most others did. He said, “I don’t think Alan Ball wrote this one. I watched this with friends and all of us were laughing, and I don’t think we were supposed to be. But, I will still be watching every upcoming show!”

Photographs are Courtesy: Joe Manganiello as werewolf Alcide by John P. Johnson/HBO, and Photograph of the reflecting pool by Link 81 Collection

May Sweeps Lackluster Drama On “Young And Restless!”