CALIFORNIA – President Trump will go to California and meet with emergency officials on Monday, September 14, the White House announced on Saturday.

Trump will travel to McClellan Park in Sacramento County and be briefed on the wildfires that have burned over 3.2 million acres across the West. Four thousand structures have been destroyed and 19 people have died as of August 15.

“Since mid-August, President Trump and Governor Newsom have spoken by phone and the White House and FEMA have remained in constant contact with State and local officials throughout the response to these natural disasters,” White House spokesman Judd Deere said in a statement.

Deere added, “the President continues to support those who are battling raging wildfires in a locally-executed, state-managed, and federally-supported emergency response.”

Trump approved a major disaster declaration for California for individual and public assistance, which began on August 14.

His administration also approved 10 Fire Management Assistance Grants and 24 grants for other states, providing a 75% federal cost share “for the mitigation, management, and control of fires on publicly or privately owned forests or grasslands, which threaten such destruction as would constitute a major disaster.” 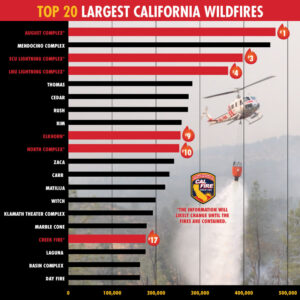 California Gov. Gavin Newsom tweeted, “6 of the 20 largest wildfires in California history have occurred in 2020.” He also mentioned that people need to “get our act together on climate change.”

“This isn’t an intellectual debate. This isn’t about ideology. The proof is right in front of our eyes. The impacts of climate change simply cannot be denied,” said Newsom.

Newsom signed a bill to reform the inmate firefighter program on Friday, September 11.