UNITED STATES—President Trump’s approval ratings continue to soar, despite negative media reports about him and attempts to impeach him during his final weeks in office.

On January 2, 2021, a Gallup Poll had President Trump listed as the most admired man of 2020. Four days later, he hosted the Save America Trump Rally prior to the certifying of the Electoral College Votes at the U.S. Capitol Building. 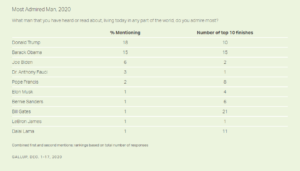 The rally brought reported crowds of 5,000 people. Canyon News spoke to one of the attendees who stated, “We left before the incident. It was very peaceful.”

Speaker of the House Nancy Pelosi, Senator Chuck Schumer, and others have blamed President Trump for the invasion on the U.S. Capitol   though the violence ensued after the rally.

Others who attended the rally reported seeing, Antifa charter buses entering Washington D.C. Proud Boys had advertisements  to dress in all-black like Antifa and on November 4, 2020, reminded members to appear like Trump supporters.  Antifa had posters following the U.S. Presidential election.

House Minority Leader, Kevin McCarthy made a statement regarding another impeachment attempt. 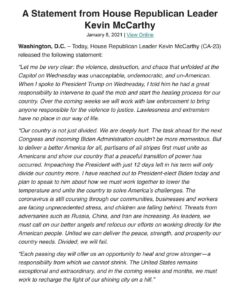 Rasmussen reported on Friday, January 8, an approval rating of 48 percent compared to the 52 percent for President Trump on November 12, 2020.

In April 2020, amidst the pandemic, the Trump economy was reported as the best in decades. 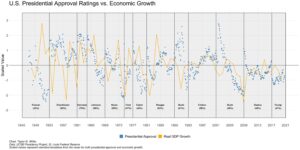 Liberal media outlets continue to say that President Trump did a terrible job during his term, but reports indicate he brought manufacturing jobs from Mexico and the oil industry from Iran. Reports indicate the unemployment rates dropped lower than it had been in ages.

Canyon News received information from an individual who was suspended from Facebook for agreeing with one of President Trump’s post.

“FACEBOOK has removed the #WalkAway Campaign and has BANNED ME and EVERY MEMBER of my team!!! Over half a million people in #WalkAway with hundreds of thousands of testimonial videos GONE. Facebook has banned everything related to #WalkAway.”