BEVERLY HILLS—On Thursday, March 3, Dr. Simone Gold, pled guilty to entering and remaining in a restricted building-area of the U.S. Capitol during the January 6, 2020 riots. The complaint was filed by the U.S. Department of Justice in the District of Columbia on January 13, 2021.

Dr. Gold, who founded America’s Frontline Doctors, admitted to giving a speech inside the Capitol building in Statutory Hall against vaccine mandates.  She later stated, “I regret being there.”

She was one of many doctors who promoted the use of Hydroxychloroquine as a treatment for COVID-19.  She advocated for the use of medications from experience noting it would work than mandating untested vaccines. 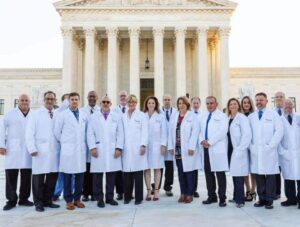 Gold faces charges including entering a “Restricted Building or Grounds; Violent Entry and Disorderly Conduct.”  She signed a plea agreement on December 22, 2021.

The conviction holds a maximum sentence of one year in jail and $500 in restitution.

Footage was shown depicting police officers attempting to get Gold and her co-defendant, John Strand to leave the premises. The officers were assaulted and dragged out of the building by their feet near Gold and Strand.

According to reports, Strand, who is a Beverly Hills security guard, entered the Capitol building wearing a black jacket, dark sunglasses, and a pale pink scarf. He was there to offer protection to Gold. According to Conan Daily, it is alleged that Strand lives with Dr. Gold and collects unemployment.

According to the affidavit from January 13, 2021, there were photos on Strands @JohnStrand Twitter page placing Gold and her accomplice in at the U.S. Capitol.

The indictment dated February 5, 2021, shows five charges against Gold and Strand including: obstruction of an official proceeding, entering and remaining in a restricted building, disorderly and disruptive conduct, disorderly conduct in Capitol Building, and parading, demonstrating, picketing at a Capitol Building. Gold signed her statement of offense on February 8, 2021.

He has been placed at the anti-vaccination mandate rally-protest in September 2021, protesting Los Angeles Mayor Eric Garcetti’s mask and vaccine mandates.