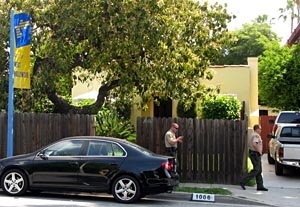 The suspects were reportedly discovered cultivating a marijuana farm near the outskirts of West Hollywood, according to the Los Angeles Sheriff’s Department. Investigators found the illegal harvest in a rear bedroom located at 1006 North Crescent Heights Boulevard, where 75 growing marijuana plants and 46 harvested ones were found placed on tables. Police additionally found two pounds of the drug that were properly prepared for sale. Numerous other plants were being cured in another room.

The suspects named in the operation are 35-year-old Etan Chriqui and 33-year-old Dustin Gilbert, both described as Caucasian males who are residents of West Hollywood. The men reportedly used the building to cultivate the plants for illicit drug sales.

Chriqui and Gilbert are currently facing charges relating to the cultivation and possession of marijuana with the purpose of selling the drug. Their next court hearing is slated forJune 15.

Sergeant Ken Davidson, of the Los Angeles Police Department’s West Hollywood division, informed Canyon News, “An officer visited a building next door to the marijuana farm on an unrelated call, and the smell of fresh, unburned marijuana coming from the building was very strong. So he did some preliminary checking on his own and did some snooping. Based on certain factors, conditions and telltale signs, it became indicative that it was a marijuana farm. So we obtained a search warrant that was served the next day, and that was when we found two guys there, tending the farm.”

When asked by Canyon News to describe the farm and the tools that were used, Davidson stated, “It was typical equipmentâˆ’special lighting, fans, generators, ventilation ducts, water. The rooms were kept at a certain temperature, and there were timers that were set at 12 hours on, 12 hours off. It was 50 degrees outside and the fans were blowing inside constantly. So an outdoor environment to grow this farm was created indoors, if that makes any sense.”

Canyon News asked Davidson about the relationship the two men had to each other, and he explained, “They were friends. When we looked inside the house, there was no furniture, no clothing, no bedding. It was a house they were renting.”

When asked by Canyon News how residents can respond if they think that an illegal drug lab or farm is being created, Davidson said, “If you think you smell an odor that you normally don’t smell and it suddenly appears one day, talk to the station. You may smell an odor or chemicals that are consistent with a marijuana farm or a meth lab.”

When asked by Canyon News if the methamphetamines drug has a distinctive odor, Davidson stated, “To describe how methamphetamines smell is kind of difficult, but it isusually a smelly, chemical-type odor, and not like just any one detergent. All I can say is that it is a very stinky chemical smell that you never smelled before, and it will definitely get your attention.”

West Hollywood residents can call the LAPD’s West Hollywood Division’s patrol or narcotics unit at 310-855-8850 if there are suspicions of an illegal drug operation.