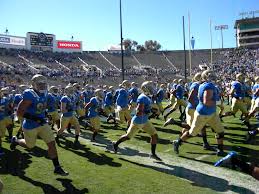 PULLMAN, WASHINGTON—UCLA found themselves trailing by 32 points in the second quarter, prior to a miraculous come from behind victory, 67-63 over the No. 19 ranked Washington State Cougars on Saturday, September 21. Bruins Quarterback Dorian Thomson-Robinson put an exclamation point to the wildest college football game this season with 1:07 remaining.

130 points is the record for a PAC-12 game, it was an instant classic.

The Bruins jumped out to an early 10-7 lead in the first quarter. The Cougars mauled the Bruins for four touchdowns in the second quarter, seemingly putting the game out of reach. WSU Wide Receiver Easop Winston Jr. caught four touchdown passes.

Felton, who has been the Bruins best player all year returned a kickoff for 100 yards. The Bruins were down 49-17 before engineering the second greatest comeback in the programs history.

The Bruins exploded for three TDS to trim the lead. In the fourth quarter, Thompson-Robinson found Devin Asiasi for a 7-yard strike. After Thompson-Robinson ran three yards into the end zone, narrowing the score 56-53.

However, Washington State was not finished yet, with 6:11 remaining in this classic, Running Back Max Borghi caught a screen pass and scampered 65 yards across the goal line, WSU 63 UCLA 60.

A Washington State fumble at their own 26 gave UCLA one final shot to claim victory from the jaws of defeat. The Felton TD reception with little over a minute remaining proved to be the difference.

This win may salvage the Bruins season. Next week, UCLA visits the Arizona Wildcats.