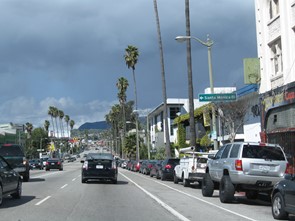 BEVERLY HILLS — The City of Beverly Hills has updated their plan to renovate the North Santa Monica Boulevard in the spring of 2015 by reconstructing the old roads, upgrading the drainage system, and conducting other repairs.

To facilitate the planning process, the Beverly Hills City Council formed the Blue Ribbon Committee last year, appointing 15 residents to develop additional recommendations that can be implemented along with the core reconstruction program, such as the evaluation of landscaped medians and bike lanes.

The Committee has held four community meetings with the public and with representatives from Psomas, an engineering firm, discussing possible ways to enhance the roadway. In addition to the meetings, committee members and residents were treated to two mobile tours that educated them about the current state of the Boulevard.

During the January 22 meeting, the committee voted to support widening curb-to-curb width, striping the pavement for bicycle lanes and adding vegetated medians. The committee was undecided on the addition of bus shelters and trees along the north side of the boulevard, and voted against the addition of bus turnouts. Also, four of the 15 committee members were absent from the meeting.