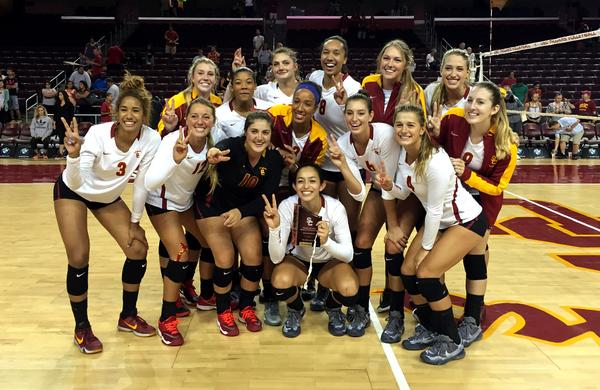 Senior outside hitter Samantha Bricio was named the tournament’s Most Valuable Player after her second double-double of the season, the 43rd of her career. She finished the game with 25 kills, 11 digs, three blocks, and a service ace while hitting .400.

A pair of USC blocks helped the Trojans go up 4-2 early in the first set, but the Cougars quickly followed with several blocks of their own and took control of the first set with a seven point lead at 15-8. A 12-5 Trojan run tied the score at 20-all and a block by Ogoms gave USC the win, 25-23.

USC ran away early in the second set with a 12-8 lead, but BYU clawed their way back into the game and eventually took the lead, 19-18. USC responded and went on to win 25-22 after a kill by Bricio.

The third set was tied at 22 apiece, but the Trojans quickly put up the remaining three points to take the set and match 25-22.

BYU finished the tournament with a 2-1 mark for second place. No. 7 North Carolina was 1-2 in third place and Chicago State was 0-3 for fourth place.