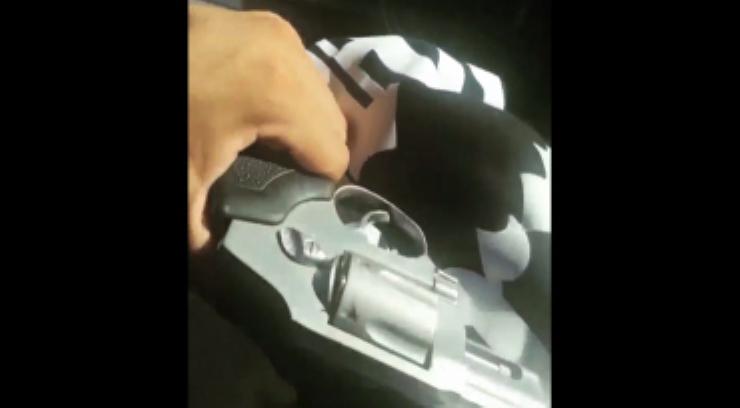 LOS ANGELES—Los Angeles Police Department’s Robbery and Homicide Division has obtained a video of a person behind the wheel of an undisclosed car, flashing a gun while watching an unmindful cop.

Investigators leading the story have declared that the video is for entertainment purposes and is non-threatening. It was was made for an “out of fashion” 90’s rap group’s comeback.

The video was recently posted to social media outlet Instagram, but has since been taken down after going viral. The LAPD has not disclosed the owner of the Instagram account, but according to reports made by NBC Los Angeles, the owner might be linked to @Brownside_Klever, according to information provided by PoliceOne.com. The @Brownside_Klever account is being used to promote the comeback of Brownside, a South LA Chicano hip-hop group that was founded in 1994.

Here's the video of the suspect stalking the #LAPD officer. Spread it around to raise awareness. pic.twitter.com/rLa8tckcWc

Police Chief Charlie Beck has obtained a felony warrant that was issued for the arrest of a “primary suspect”. The assailant in question was once convicted prior to the video incident for carrying a firearm. According to Beck, “The crime committed was carrying a loaded firearm in a vehicle. He has a prior conviction for the same offense which makes this into a felony.”

3 suspects who are linked the video have been identified, but so far the police have not disclosed any names or suspects at this time.

There is no confirmation from the LAPD on whether the Instagram account is linked to the arrest and the names of the vehicle, the officer involved, and the suspect wielding the gun have not been disclosed.