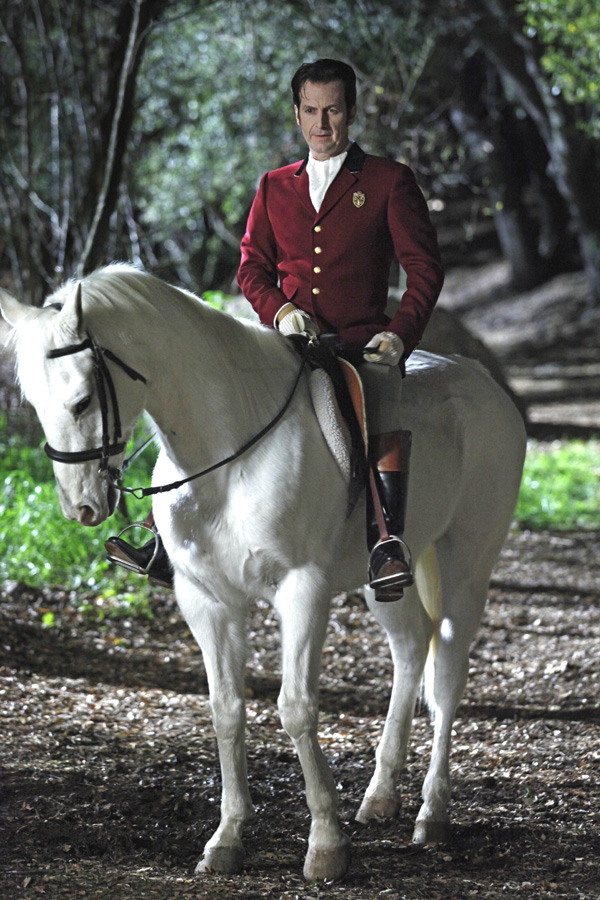 HOLLYWOOD—Last week the King of Mississippi Russell Edgington and Eric Northman faced the true death. Eric lured the King outside with the belief that after taking some of Sookie’s blood, that they were now able to go out into daylight. A tearful Russell had waited 3,000 years to be able to finally go out in the sunlight after being in darkness as an undead for so long. What was going to become his ultimate dream, to live in daylight again, ended with the sun scorching down on him and Eric, who handcuffed the King to himself, so that they could both die the true death together.

Eric’s progeny Pam was inside his bar Fangtasia with Bill tied up in silver chains, begging to be released so that he could give Sookie, who is unconscious some of his blood to revive her. “Release me, Pam, or Sookie will die,” were the last words we heard of the handsome vampire, Bill Compton. Fans speculated that Russell must be going, but hope that the Viking vampire Eric will survive. “I think Russell will be killed, but Pam or Bill will get Eric back inside before he dies,” said Bobby Head. “I hate to see the King bite the dust, but I suspect that’s the case.”

Truebie Jackie Monroe said, “I hope Eric doesn’t die. That man is just too pretty to die!” While Nicole Stuckey tells Canyon News, “I can hardly wait for the season finale next week. The show is so good this season. I just wish Jason would leave that Crystal alone. She’s bad news.”

Sherman Oaks based Truebie Wendy Fujimori contemplated her feelings about this season. Then she stated, “The end of this season has everyone in a potential cliffhanger. Last season’s finale we just dealt with Maryann. The end of this season is a big mess. Way too much going on. How they plan to wrap up any of these storylines remains a big
freaking question.”

Wendy further commented on what she hopes next season will look like for viewers. “My fantasy for next season would include prequel stories, Sookie’s history; Lafayette’s history; Arlene’s history and background stories explaining how all of the character became who they are today. Not all in one episode obviously. That’s my wish,” said Fujimori.

Canyon News reader, Rene Thurston summed it up best. “I’ll be sad to see the end of Russell Edgington, if it is indeed the end. Denis O’Hare has made this character over-the-top fabulous.” My prediction is as Bobby suggested, Eric will survive and Russell most likely will submit to the true death.