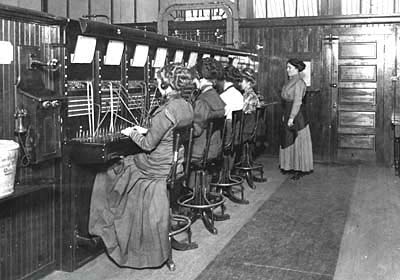 UNITED STATES—It seems like every time I see a historical documentary about the 20th century, the narrator tells me that this or that major world event marked the first time women entered the workforce. This is one of the most demonstrably self evident falsehoods that is generally accepted to be true.

OK, so let’s start with common or garden variety history of the ordinary American. Many people get most of their history, seemingly, from Disney movies. Consider one of the best classics: “Mary Poppins,” with Julie Andrews and Dick Van Dyke. Everybody remembers those characters. The film was set in pre-WWI London, in 1910. Among the principal players were six adult women: Mrs Banks, a wife and mother; Katie Nanna, the original nanny; Ellen, the Bank’s Maid; Mrs Brill, the Bank’s cook; the Bird Woman at St paul’s, self employed; and Mary Poppins herself. Of those six women, how many were gainfully employed?

When five out of six of the women in an idealized look back at an idealized past were gainfully employed, why do people think that women were not generally in the workforce? The same is true in historical fiction like Upstairs Downstairs, and Downton Abbey, most of the women are employed, only the idle rich women, and men, do not have jobs. But the idea still persists that women didn’t work until WWI, because that’s when some of the wealthy women chose to begin working.

Now, let’s cast our minds back a lot further. How much further back is largely irrelevant. Really any time between 1800 AD and 1800 BC will do. Approximately 90 percent of all the human beings were engaged in this period in the job of farming. Now consider how women are employed on farms. Think of Asia and consider how many times that rice paddy you imagine is populated by women and buffalo. Men farm, too. But it doesn’t really matter, work-wise, if you’re ploughing the North forty with an ox, tending the kitchen garden, or milking cows. You are working.

And in addition, in just about every city, town and village in the world, whenever there is the possibility of generating any income by some work done in the home, women are invariably employed in this work. Doing laundry for other people, doing craft piecework, weaving, spinning, and midwifery are easy examples of this fact. In times of old, men, women and children in many households were all employed doing piecework at least some of the time. Older people who were incapable of heavier physical tasks often were employed in this kind of work full time.

In documentaries, which frequently include fictionalized dramatizations of past events and circumstances, and even more in dramatic fiction, we see the same people time after time: upper class aristocrats or upper middle class people (business owners, almost never the workers in those businesses). The scene may be peopled with a cast of a thousand nameless peasants, but we rarely get details about them. When we see home life, or when occupations are discussed, we invariably omit more than 90 percent of the people who ever lived and focus upon the tiny minority who owned things and ran things.

Why do historians and biographers cling to this notion of a legion of largely idle housewives? Of course, the notion of an idle housewife is a huge misconception in itself. Anyone who has ever been a housewife can tell you that it is a demanding and responsible position. The plain fact is that most women, by necessity, in addition to all the assumed tasks and responsibilities entered into as a wife and a mother, also worked every available minute of every day, just as their husbands did, whenever and however it was possible to do so.

Why then do so many people ignore this plain unequivocal truth? What purpose is served by minimizing the contribution and labor of women? Why do so many want to belittle and underrate women? The answer is very simple: if you want to make the contribution of one group seem larger and more important, you have two alternatives: either you can find real, substantial evidence of a greater or superior body of work and effort provided by that group, or you can minimize and underrate the body of work and effort provided by the other group, so that your preferred group’s contribution appears larger by comparison.

We have a word for this: patriarchy (a social system in which males hold primary power, predominate in roles of political leadership, moral authority, social privilege and control of property; in the domain of the family, fathers or father-figures hold authority over women and children *Wikipedia). By treating the contribution of women as minimal or unimportant, it makes the contribution of men seem larger and more important. In reality, in most cases, the contribution of men and women to home, to family, and to community is almost always approximately equal, in terms of time, talent, effort, importance and benefit. It is just viewed differently. The more unequal the society is in its treatment of women, the more separated the realms of occupation and contribution are, and the less the women’s contribution is valued. Things have changed since 1910, but not everything, and not everywhere.

It is a defensive mechanism to support and defend an injustice. All forms of human injustice develop this kind of self-serving protective camouflage. To a man brought up in a traditional home in Saudi Arabia the subjugation and oppression of women by men seems normal, natural and inevitable, and the notion of equality of women to men, of any kind, seems unnatural, dangerous, blasphemous and despicable. He has been taught to believe this, and he has been taught not to question those beliefs, and so have the women. Some men, given that upbringing, may have the intellectual capacity and ethical bandwidth to inquire into and modify their beliefs. Most do not. In such societies, those who do question the status quo are typically treated badly by both women and men. They are supposed to get the message, in no uncertain terms, that what they have done is wrong and probably dangerous.

Slave owners had all the best moral, ethical, and biblical reasons why slave owning was a good and necessary thing. Modern day homophobes similarly dress their fear, hatred and prejudice in holy garb, and justify their discriminatory practices or acts of violence as necessary and contributing to a better world. We have seen religion used for millennia to justify cruelty and violence against women, people from other places, and any other group of convenience. Some religious leaders still preach that the beaten wife has only her own sinful nature to blame. Hate and ignorance have always been the best bedfellows.

We have made vast improvements over earlier times. There is far more equality and a far greater expectation of equal treatment than fifty, a hundred or two hundred years ago. But although we have generally been moving along the right road, and usually, if not always, in more or less the right direction, we still have not arrived and to many it seems that there is still far, far too long a road to go before they achieve real equality. They’re tired of living on promises about someday.

And some are travelling in the wrong direction, demanding an end to progressive change and equality. All over the world different people, usually fundamentalist religious groups of many different faiths, wage a daily war on equality under the law for all people, particularly women. When we object to their injustice they call us racists or intolerant bigots, claiming the right to perpetuate a religious and ethnic heritage of injustice.

What is needed is for people to come to a better and more accurate assessment of the role and contribution of women both in ages past and today. We need to recognize and combat the institutional prejudice against women, and recognize how our attitudes shape the daily reality of women today. An injustice does not stop happening because it is named. Prejudice does not go away because you recognize it in other people. It is only when we discover these injustices in our own hearts, and cure them there, that we can bring other people out of the grip of old ideas and comfortable notions, that do so many people so much harm, and prevent the world from being a better place for every human being.