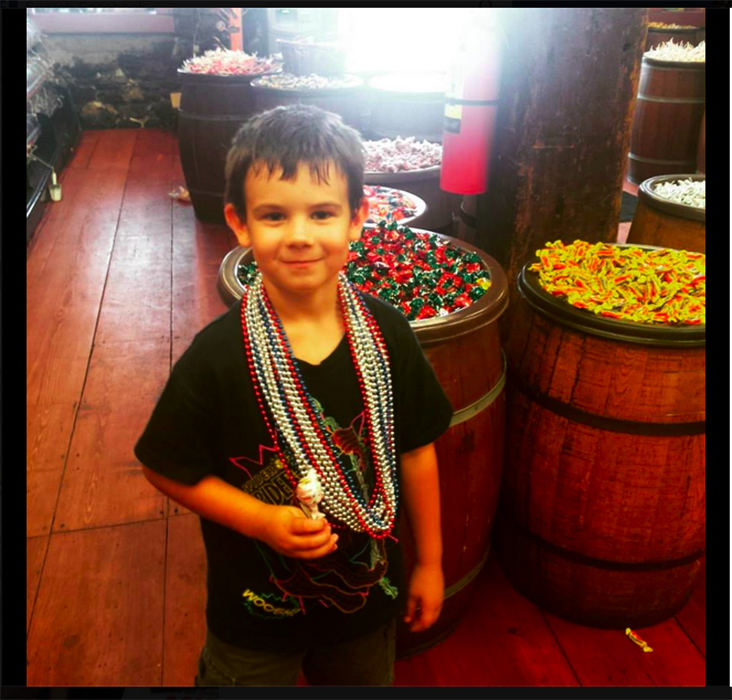 SAVANNAH, GA—It is a warm summer afternoon in Savannah, Georgia. Dozens of wanderers pass through the brick corridors on the cobblestone streets of Downtown Historic Savannah. Amongst the crowds, perched to the side, is six-year-old Jaden Hayes; a young boy with a big smile and an even bigger heart. Hayes is on a mission to collect as many smiles as possible before the day’s end.

Hayes sits with his aunt, Barbara DiCola, holding a curated smile-artillery of shiny necklaces, toys, and small trinkets, as they wait to approach the perfect passerby; a person without a smile. Hayes then fearlessly dashes up to the strangers to greet them with an item of their choice and evokes a warm hug and grand smile on a previously idle face. Jaden’s project has been deemed #TheSmileExperiment, and has an international following of over 3,000 people on Facebook.

Haye’s mission and heartwarming project stems from a tale of heartbreaking circumstances. At six-years-old, Hayes is an orphan, living with his aunt. When Hayes was only four-years-old, his father passed away, and in July 2015, Hayes found that his mother had unexpectedly died in her sleep.

DiCola recalls the transforming day Hayes attended his mother’s funeral. Though heartbroken, Hayes noticed that all the adults were walking around with sad, frowning faces; no one was smiling. That’s when Hayes collaborated with his aunt and decided to do something about what he was seeing.

Since the project’s launch, Hayes has collected over 600 smiles, and continues to receive donations of toys from all over the country. Hayes’ favorite trinkets have been rubber duckies, plastic dinosaur figurines, and bottles of bubbles. Hayes has declared that he has made it his ambitious goal to make 33,000 people smile through The Smile Experiment.

To contact or donate to Jaden’s Smile Experiment, e-mail JadensTheSmileExperiment@gmail.com.