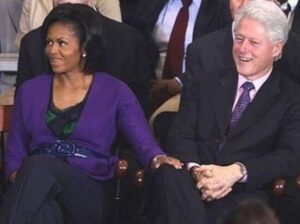 While some of the candidates to talk about themselves and the Biden-Harris ticket, others attacked the POTUS. 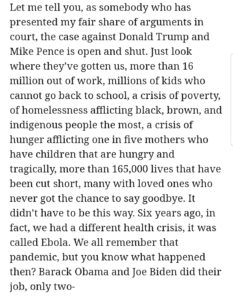 Michelle Obama opened with her speech touting her husband’s work as POTUS and indicated that President Trump was at fault for the 150,000 coronavirus deaths because he, “downplayed the virus for too long.” The former first lady says because of this “our economy is left in shambles.”

President Trump stopped individuals from flying in and out of China, as a result of the coronavirus spreading. The House Intelligence Committee did not give President Trump information on the coronavirus outbreak in China when it was reported to them, when Chairman Adam Schiff was leading the impeachment inquiry.

“Unlike so many of you, Barack and I have tried our best to instill in our girls a strong moral foundation,” said Michelle Obama.

Photos circulated with children in what appeared to be caged were fenced in detention facilities built during the Obama administration in 2013.

Vermont Senator, Bernie Sanders stated, “Trump’s negligence exacerbated the economic crisis we are now experiencing. Since the pandemic began, over 30 million people have lost their jobs and many have lost their health insurance.”

Prior to the pandemic, the economy under the Trump administration was the best it has been in over 50 years.

Vice President Mike Pence reported on August 15, 2020, that, “We’ve created more jobs in the last three months than Joe Biden and Barrack Obama created in their 8 years in office.”

Alexandria Ocasio Cortez spoke on day two, where she said:

“In a time when millions of people in the United States are looking for deep systemic solutions to our crisis of mass evictions, unemployment, and lack of healthcare, and out of love for our people, I hear by second the nomination of Senator Bernard Sanders of Vermont for President of the United States of America.”

“Donald Trump inherited a growing economy and a more peaceful world, and like everything else he inherited, he bankrupted it,” said John Kerry.

Market Watch reported on August 18, 2020, that the S & P 500 marked its first record close in 6 months, marking the quickest recovery in history.