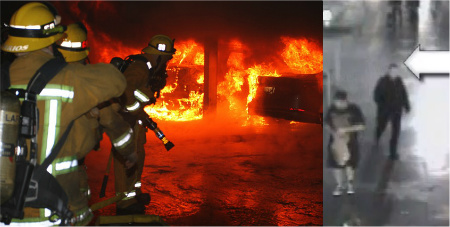 WEST HOLLYWOOD—On Wednesday, January 4, the Los Angeles district attorney charged the man suspected of having recently set 52 fires in L.A., including seven in West Hollywood and three in Sherman Oaks, with 37 felony arson counts. The Los Angeles Fire Department estimates that the blazes caused about $3 million in property damage.

Harry Burkhart, 24, has been charged with the arson of 10 inhabited West Hollywood and Sherman Oaks properties between December 30-January 2, which were owned by 24 residents, according to the felony complaint filed by District Attorney Steve Cooley.

Of the 37 felony counts, Burkhart is charged with three counts of damaging a Sherman Oaks resident’s vehicles, Sandi Gibbons of the district attorney’s office told Canyon News. Many of the fires began in car ports and spread to adjacent homes.

One of the properties was a Hertz Rent-A-Car station at 7100 Santa Monica Blvd. in West Hollywood.

The complaint alleges that the acts of arson were caused by devices that accelerated the fires. If proven true, and if prosecutors can convict Burkhart of 42 other L.A. arsons to which he may still be tied, he could face additional time in custody. If convicted of the 37 felony counts, Burkhart would face a maximum 185 years in state prison.

Deputy District Attorney Sean Carney of the target crimes division asked that Burkhart be held without bail, but the court set his release at $2.8 million. He is currently being held at the Twin Tower Correctional Facility in L.A., booking details state.

Burkhart, who was allegedly born in Chechnya and traveled in the past with a foreign passport, has also reportedly been tied to an arson and fraud investigation in Neukirchen, Germany. If the bail amount were paid, he would also have to surrender his passport.

Ed Nordskog, a detective with the L.A. County Sheriff’s Arson/Explosive Detail, wrote in an affidavit, “The defendant’s criminal spree was motivated by his rage against Americans and that by setting these fires the defendant intended to harm and terrorize as many residents of the city and county of Los Angeles as possible.”

Before his January 3 arrest, Burkhart was staying with his mother Dorothee in Hollywood. He was at her immigration hearing in L.A. on December 29, one day before the fires began. His mother had been placed in federal custody due to a German warrant issued for her arrest relating to fraud and embezzlement charges.

According to the affidavit, Burkhart attempted to talk to his mother at the immigration hearing. But he was ejected from the courtroom after angrily cursing out Americans. At another immigration hearing on January 3, Dorothee Burkhart, who is a native of Germany but fighting U.S. extradition back to her county, said her son is mentally ill.

Third District L.A. County Board Supervisor Zev Yaroslavsky related in his blog that Burhkart was arrested by a West Hollywood Sheriff’s Department volunteer patrolling Sunset Boulevard when he spotted and pulled over the suspected arsonist driving a minivan. The van matched one the Arson Task Force said was tied to the arsons. And Burkhart matched the description of a man who was earlier identified in an LAPD video as a person of interest leaving the scene of one of the fires.