UNITED STATES−On Tuesday, May 13, Congresswoman Alexandria Ocasio-Cortez of New York, lost the endorsement of the Working Families Party (WFP), has and been removed from the ballot.

Ocasio-Cortez, who represents part of Queens and the Bronx in New York failed to collect the 15 signatures required to stay on the WPF ballot, but also removes her from WFP ballot line in the November 2020 general election. 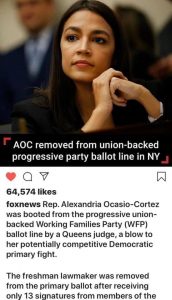 Governor Andrew Cuomo lowered the signatures required to qualify to be on the primary ballot to 15. Ocasio-Cortez had 14 signatures. One of the signatures was not valid because the voter was a registered Democrat.

The Working Families Party is an independent political party that cross-endorses and promotes progressive candidates such as Senator Bernie Sanders in the 2016 election. Sanders introduced Alexandria Ocasio-Cortez in an effort of his then Chief of Staff, Saikat Chakrabarti in their effort to promote, a Brand New Congress. 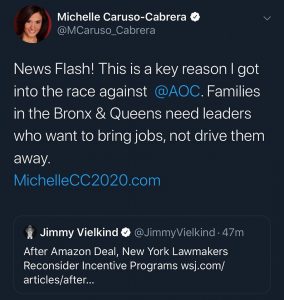 Caruso-Cabrera told the New York Daily News:
“AOC has working people of the Bronx and Queens with her votes and creates disunity within our party. No wonder why pro-union forces don’t want her, and neither do our neighborhoods.”

Caruso-Cabrera advertises that she is the only candidate that can defeat Ocasio-Cortez, who in her last term took her seat as the youngest congresswoman in U.S. history.

According to Ballotpedia, there are several others vying for Ocasio-Cortez’s spot including Republican John Cummings.