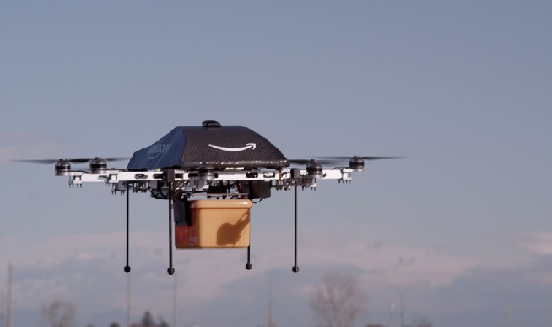 Jeff Bezos, Amazon CEO, first announced the Amazon Prime Air project on “60 Minutes.” He elaborated the drones will be able to carry anything up to five pounds in weight and carry it for a 10-mile range. Bezos told “60 Minutes” that 86 percent of orders from Amazon are less than five pounds.

On their website, Amazon expresses their excitement at this advancement in their delivering technology. Working hand in hand with the Federal Aviation Administration (FAA,) Amazon is working out the kinks and making sure their air drones will be up to regulation by 2015.

In a short commercial demonstration, Amazon displayed their current drone technology in action. With the introduction of Amazon Prime Air, they hope that packages will be delivered to the buyer with 30 minutes; but many people have their doubts about how safe and/or successful this drone usage is. In recent reports, the idea of sky-hacking is a reality that may shut down Amazon’s hopes of having unmanned delivery drones.

Privacy and Security Reseacher, Samy Kamkar, made the fears of package tampering/thievery come to life when he created “SkyJack,” which is also an unmanned drone. On his blog, Kamkar uses a “Parrot AR.Drone 2, a Raspberry Pi, a USB battery, an Alfa AWUS036H wireless transmitter, aircrack-ng, node-ar-drone, node.js, and [Kamkar’s] SkyJack software, [he] developed a drone that flies around, seeks the wireless signal of any other drone in the area, forcefully disconnects the wireless connection of the true owner of the target drone, then authenticates with the target drone pretending to be its owner” enabling the hacker to hijack any unsuspecting air drone.