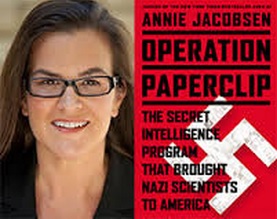 SANTA MONICA—Investigative journalist and author Annie Jacobson will be presenting her latest book, “Operation Paperclip: The Secret Intelligence Program That Brought Nazi Scientists to America,”Â at the Santa Monica Public Library on Tuesday, February 11 at 7:00 p.m. This is Jacobsen’s second time presenting her work at the library.

According to Skylight books, Jacobsen dug deep to uncover secrets in the world of World War II; as the title suggests, one of Germany’s greatest assets was their progression in world science. Jacobsen explains the value the U.S. saw in these scientific minds and goes on to explain how the American government was able to bring scientists working for Germany into America via “Operation Paperclip.”Â

Jacobsen has written a total of three books; in 2011 she presented her second book at the Santa Monica Public Library, titled “Area 51: An Uncensored History of America’s Top Secret Military Base.”Â In 2005, she released her first book, “Terror in the Skies: Why 9/11 Could Happen Again.”Â

The event will be located in the Main Library’s Martin Luther King, Jr. Auditorium on 601 Santa Monica Boulevard. “Operation Paperclip”Â will be available for purchase, as well as a signing from the author after the presentation.