UNITED STATES−On Thursday, January 21, Rep. Marjorie Taylor Greene of Georgia introduced articles of impeachment against Joe Biden citing that while serving as Vice President under Barack Obama, he was involved in corrupt actions leading up to the quid pro quo in Ukraine.

Congresswoman Greene cited in a press release Biden’s abuse of power by allowing his son Hunter , “To siphon off cash from America’s greatest enemies, Russia and China.

“Joe Biden abused the power of the Office of the Vice President, enabling bribery and other high crimes and misdemeanors, by allowing his son to influence the domestic policy of a foreign nation and accept various benefits—including financial compensation—from foreign nationals in exchange for certain favors. President Biden gravely endangered the security of the United States and its institutions of government. Through blatant nepotism, he enabled his son to influence foreign policy and financially benefit as a result of his role as Vice President,” Greene states. 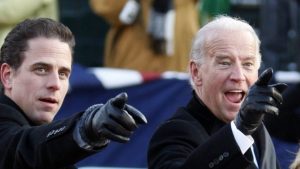 While Biden was campaigning for President of the United States, footage of the former VP in an interview with the Council of Foreign Relations (CFR) resurfaced. It depicts Biden discussing one of his many trips to Kyiv, Ukraine. He indicated that he was assigned to Ukraine. With a chuckle, Biden said, “I got all the good ones, [referring to his assignments].”

Biden later indicated while in Ukraine, he was supposed to announce another billion-dollar loan guarantee, and got a commitment from both Poroshenko and Yatsenuk.

“I had gotten a commitment from [Ukraine President Petro] Poroshenko and [Ukraine Prime Minister, Arseniy] Yatsenyuk that they were going to take action against the state prosecutor and they didn’t,” said Biden.

“I’m leaving here in six hours. If the prosecutor is not fired, you’re not getting the money. Well, son-of-a-b****, he got fired,” Biden said. He added, “and they put in somebody solid…”

Shokin is  the former Prosecutor General of Ukraine that lost his job over the dealings between then VP  Biden, Poroshenko, and Yatsenyuk.

Biden’s son, Hunter reportedly held a position on the board of Burisma Holdings, the largest natural gas and energy company in Ukraine. Hunter failed to disclose the $400 million he received from Burisma while serving on their board.

Canyon News was able to obtain an April 24, 2015 copy of the Ukrainian Weekly revealing the conversation between the three.