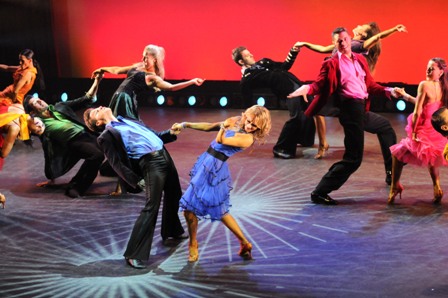 HOLLYWOOD—“Ballroom with a Twist” at the El Portal Theatre, possibly drew the most eclectic audience in the history of the landmark venue, from teenage fans of hip hop to senior citizens who remember with great fondness a time when Ballroom lessons were a required part of growing up. Of particular interest to patrons both young and old was an audience participation portion of the evening that found even 100-year-old Rosa Thompson of Altadena up on her feet and dancing, quite literally, in the aisles.

A show that offers the perfect fix for fans who can’t get enough of the hit series “Dancing with the Stars” and “American Idol,” “Ballroom with a Twist” successfully melds the popularity of these programs on one stage for a two-hour fantasy of movement and vocals. Hosting duties were shared by the show’s creator and choreographer, Louis van Amstel, and former “Dancing with the Stars” contestant, Niecy Nash. Set to take over the hosting position is another former “DWTS” favorite, Ms. Jane Seymour, on February 4, 5 and 6.

“Ballroom with a Twist” has been successfully touring the country and Canada to rave reviews. This particular engagement was a Los Angeles premiere, with plans, according to unconfirmed rumors, of heading off to New York and the Great White Way. Ballroom boasts an amazing ensemble including dancers from “High School Musical – The Movie,” “Dance Your Ass Off” and “Dancing With The Stars” dance pros such as Edyta Sliwinska, Alec Mazo, Jonathan Roberts and Anna Trebunskaya. Other dancers also come from “So You Think You Can Dance” such as season five’s Randi Lynn Evans, Gev Manoukian and Jonathan Platero, in addition to “American Idol” finalists from season seven, David Hernandez, and season six, Gina Glocksen, who provide exciting live vocals.

“Ballroom” offers something for everyone, opening with “Fosse” for the Broadway lovers; “Come Away With Me” featuring the talented married duo Johnathan Roberts and Anna Trebunskaya; as well as “MalagueÃ±a” performed by another “Dancing” duo, Alec Mazo and Edyta Sliwinska; “I Got Rhythm” with Paul Barris and Snejana Petrova; “Rescue Me” with hosts Louis Van Amstel and Niecy Nash; the vocal splendor of “Without Love,” performed by David Hernandez & Gina Glocksen, wrapping the evening with a high energy performance of Swingtime and so much more.

This ground-breaking show pushes the boundaries of ballroom dance, infusing it with energy and the intensity of the classic ballroom, along with the latest authentic, hip-hop and Broadway styles. “Ballroom with a Twist” is an extravagant evening of entertainment for the entire family, highlighted by stunning costumes, magnificent music and breathtaking performances. “The costumes are pretty much what you see on ”˜Dancing With the Stars,’” says van Amstel. “They’re young, they’re hot, they’re in the best shape of their lives.” Van Amstel knows how to get people to move but wants to move the audience. “What I want people to take home with them is that they’re being touched,” he concluded.

“For those interested in more information regarding this engagement go to elportaltheatre.com,” says Pegge Forrest of the El Portal, adding “And take a look at ”˜Ethel Merman’s Broadway’ starring Rita McKenzie opening on February 17.”

As Jane Seymour prepares to take over as Celebrity Host for this weekend’s “Ballroom With A Twist” (February 4-6), the “Dancing With The Stars” celebrity dance pros (Edyta Sliwinska, Alec Mazo, Jonathan Roberts and Anna Trebunskaya) are going to make a rare appearance at The Grove on February 5 from 12-1 p.m., offering a free master dance class.

It is a chance for the public to see and even dance with their four favorite “DWTS” celebrity dance pros as they teach patrons how to dance like a star.

There will be a Dance off, where the lucky winning couple will win free VIP tickets and make an appearance live on stage in “Ballroom With A Twist” now playing at the El Portal Theatre thru February 13 only.