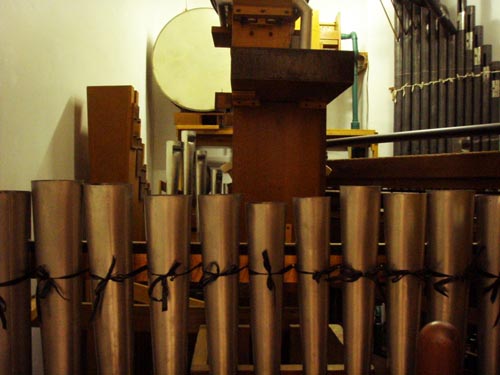 LAUREL CANYON—I learned what our actor/neighbors consider Acting 101 on a recent outing. I love being a tourist in L.A. Most of us who live here don’t take advantage of events that fly under the radar of tourists who need to decide which of the major attractions they can squeeze into their trip to L.A., leaving the real goodies for locals. I’m a sucker for old architecture, so off I went to get a tour of the “back of the house” at the El Capitan – excuse me – The Disney El Capitan Theater on Sunset. I had a ball.

Despite the god awful hour (7:45 a.m.) there was a crowd outside the theater.Walking there, I noticed people with cameras and tripods photographing the closed doors of the Mann’s elegantly wood carved front doors. Others make you look at what you see every day – I mean really look. The doors are usually open and there’s always a crowd milling around so you it is easy to miss the elegance.

Our group was greeted in the storm lobby. (I’m so smug about my new vocabulary.) This stuff is old hat to actors, but I embraced it. We were hosted by an army of passionate volunteer/members of the Los Angeles Historic Theater Foundation. We were ushered inside the theater and settled into the Reserved Seats at the “front of the house” where we were treated to a lecture accompanied by a slide show. We were talked through the history of the building. It was originally a live performance theatre, which is why they have a full stage where Disney now puts on its pre-movie live shows which hush the audience into wide-eyed wonder.

Almost all of today’s movie houses on Sunset Boulevard were built in the mid-1920s as grand “live performance theatre” houses. In 1925, the area running from La Brea Avenue east on “Sunset” was being developed as competition to New York’s Broadway Theatre District. The dÃ©cor of this building may have been influenced by the ostentatious vaudeville venues which were being built. As a live performance theatre, the El Capitan came with a curse – why not? It was said that if an actor performed here, his/her career was doomed. Fact or fiction?

The best of all was the show stopper, Ethel, the name given to the 2500-piped Wurlitzer Theatre Organ, whose pipes are hidden behind the opera boxes and all over the “house.”  Ethel, originally built for another Fox movie house, traveled to the El Capitan where the theatre was remodeled to accommodate the organ.In the old days, an organist would accompany silent movies, which often had originally scored music. “Birth of a Nation” traveled with a full orchestra. My mother played the piano at silent films as a weekend job. During the tour, we got the chance to peek into the various pipe rooms. Orchestra sections, controlled by Ethel’s keyboard, like percussion instruments, were housed in separate rooms, with the unexpected signage “Hearing Protection Required”.

We got to poke around at the fly rails and look up into the fly loft. The monster curtains and backdrops disappear in a blink of the eye.  Zuupp – and they’re gone!

I left with a smile plastered on my face.