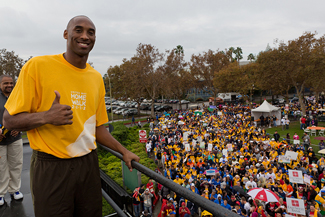 BEVERLY HILLS — More than 13,000 people participated in the seventh annual HomeWalk on Saturday, November 23, in support of United Way of Greater Los Angeles’s mission to end homelessness in Los Angeles County. The event took place in Exposition Park. Corporate supporters included Korn/Ferry International and City National Bank, both of them from Beverly Hills.

The goal of the event was to raise funds to support United Way’s plan to increase the high school graduation rate, cut the unemployment for veterans in half and provide permanent housing, jobs and medical care for victims of chronic and veteran homelessness. So far, United Way has provided homes for over 10,000 homeless individuals in Los Angeles.

The 5K Run/Walk began at 9:00 a.m. The participating walkers were divided into teams, each led by a captain, and participants who were able to raise $500 or more were crowned HomeWalk heroes. A total of $426,000 was raised from the event, less than the expected goal of $500,000; the Conrad N. Hilton Foundation will be matching the donation amount. The most prominent supporter of the event was Kobe Bryant and his wife Vanessa. Bryant served his third year as the event’s honorary chair and had his own team of walkers/runners; the team member who raised the most funds had an opportunity to meet and greet with Bryant at the event. Bryant’s team raised $35,782, just a few thousand shy of his $40,000 goal.

Apart from the HomeWalk, United Way of Greater Los Angeles will begin a 100-day campaign starting from December 1 to raise more funds, raise awareness and engage the public in volunteering.