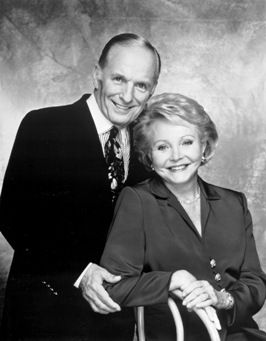 BEVERLY HILLS—Lee Phillip Bell, co-creator of “The Young and the Restless” and “The Bold and the Beautiful” with her late husband, William J. Bell,  was granted honorary lifetime membership to the International Alliance of Theatrical Stage Employees (IATSE) Local 33 in recognition of her decades-long contribution to the union and the livelihood of its members.

In a simple ceremony on “B&B’s” Stage 31 at CBS Television City, IATSE Local 33’s Paul Paolasso, Business Representative-TV, presented the television maven with a gold plated lifetime membership card and a tool belt with her name embroidered on it. In front of the cast, crews and staff of both “B&B” and “Y&R,” Paolasso recognized Bell, stating she was being honored “For the family atmosphere that exists on the ”˜Y&R’ and ”˜B&B’ stages and because she has provided the members of IATSE Local 33 with the ability to support their families for so many years.” He went on to say, “Local 33 gives honorary memberships to those they feel have been great contributors to the world of entertainment and who have sustained the livelihood of those who have made this industry their home.” Past recipients include Bob Hope, Dorothy Buffum Chandler and CBS’ own Charles Cappleman.

Lee took to the podium and thanked everyone for congregating before playfully saying that she’d be using the tool belt soon. She then remarked, “It is such an honor and I’m grateful to each and every one of you for being so kind and gracious through the years.” She was later joined on stage by her children: Bradley P. Bell, executive producer and head writer of B&B; William J. Bell, president of Bell-Phillip Television Productions, Inc.; actress Lauralee Bell Martin; and daughter-in-law Maria Arena Bell. The cast of both shows and the members of Local 33, who work on “B&B” and “Y&R,” took up three stages.

As an EmmyÂ®-award winning broadcast journalist, Bell’s lifelong exploration into issues of social concern has woven its way into many of her own show’s daytime storylines.

She was the host of “The Lee Phillip Show,” broadcast on WBBM-TV Chicago, from 1952 to 1986. The show is widely considered a pioneer in the evolution of the afternoon talk show format and a trailblazer in the exploration of timely social issues and concerns. Bell served as producer and narrator on numerous award-winning specials and documentaries on subjects such as foster children, rape, children and divorce, and babies born to women in prison.

Bell has been honored with scores of awards over the course of her career, most recently with the National Academy of Television Arts and Sciences Lifetime Achievement Award (NATAS) in 2007. She received the 1993 Broadcaster of the Year Award from the American Women in Radio and Television and the 1993 Director’s Choice Award from the National Women’s Economic Alliance Foundation. She received 16 local EmmyÂ® Awards in Chicago and an EmmyÂ® Award in 1980 for Community Service. 1n 1973, she received an EmmyÂ® as well as the coveted Alfred I. DuPont-Columbia University Award for producing the special, “The Rape of Paulette,” the first televised program dealing with the subject. In 1975, Bell received the “Outstanding Daytime Drama Series” EmmyÂ® as co-creator of “The Young and the Restless” and the Governor’s Award from the Chicago chapter of NATAS. In 1996, Lee Phillip Bell and Bill Bell were both honored with the Striving for Excellence Award ”“ Minorities in Broadcasting.

“It’s a special thrill to learn Lee Phillip Bell has been honored in such a lovely way by IATSE,” says TV Guide columnist Michael Logan. “We never lose sight of Mrs. Bell’s extraordinary creative contributions to daytime television. How can we when the two soaps she co-created have a stranglehold on the #1 and #2 spots in the Nielsen ratings? That is unprecedented power! But we rarely think about her awesome contribution on the personal front. Cumulatively, ‘The Young and the Restless’ and ‘The Bold and the Beautiful’ have given us 60 years of entertainment and that also means they have provided 60 years of livelihood for the many backstage technicians who make these shows possible. The importance of that, especially in these troubled economic times, cannot be overstated. In fact, it should be shouted from the rooftops. Don’t tell Erica Kane I said this, but Lee Phillip Bell is the truequeen of daytime!”