BEVERLY HILLS—On Wednesday, May 25, Beverly Hills Police Department announced enhanced security, and surveillance around the local schools after the school shooting in Uvalde, Texas on Tuesday, May 25.

The suspect has been identified as Salvador Ramos, 18, who shot and killed his grandmother before entering Robb Elementary School in Ulvalde, Texas. He killed 19 children and killed two adults. Several others who were injured during the shooting were transported to area hospitals for treated. Ramos was armed with an AK-47 and an AR-15 and body armor during the incident. He was shot and killed after a standoff with police. 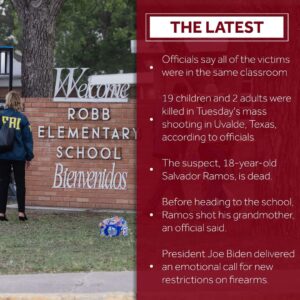 In a May 24, press release, California Attorney General, Bob Bonta issued a statement regarding the Texas shooting and address the increase in gun violence in California.

In a separate incident, Beverly Hills High School sheltered in place on May 19, following an alert posted on social media about an armed man on campus utilizing an air soft gun. The suspect was taken into custody without incident and there were no reports of any injuries.