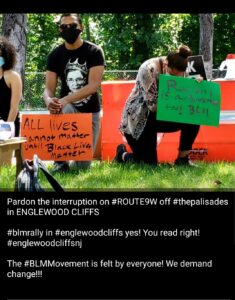 The BLM advocate planned the protest on the heels of a dispute between city officials over affordable housing. Gil indicated she was exercising her first amendment rights and claimed that the protest consisted of 40 people and that it was a peaceful protest and everyone cleaned up after themselves. She told NJ Advance Media that “Englewood Cliffs has dodged affordable housing requirements for 40 plus years.”

Mayor Kranjac indicated that the charge was for security. and that Gil failed to notify the city of the protest in advance to allow them to plan accordingly.

“Your lack of notification left the borough with little time to prepare for your protest so that the police department and department of public works could ensure that everyone could be safe,” said Mayor Kranjac.

Gil reported to Advanced Media that the city required an in-person meeting, which she declined, “due to COVID.” She relayed that she suggested a Zoom meeting, which was not possible at the time for the city officials.

CNBC reported a second letter by the mayor and another rescinding the fee. Gil did not have to pay the extra cost.

“I have researched the issue further with my own counsel and I am hereby rescinding the bill, subject to our Council’s ratification of my action,” said Kranjac. He noted the borough’s ordinances would be adjusted to respect constitutional rights.

Commenters tweeted the mayor for “charging a teenager for a private peaceful protest.” Some commented that Mayor Kranjac was a bully and others used profanity in addition to other negative comments.

Mayor Kranjac indicated that billing for security wasn’t anything new.

”I’ve been consistent throughout,” he said. “If anyone does an event in town, we bill them.”