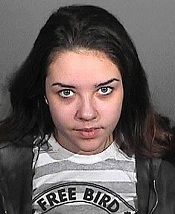 HOLLYWOOD HILLS —Alexis Neiers, the 19-year-old star of the E! reality show “Pretty Wild,” and member of the “Bling Ring” crew that burglarized several celebrity homes since 2008, has been sentenced to spend the next 12 months at a drug treatment center in Malibu.

The sentencing took place Thursday, December 9, in a Los Angeles County courtroom and comes after probation officers found heroin and a fake ID in Neiers’s Thousand Oaks home on December 1. Neiers admitted to probation violation by possessing heroin. She has since been in jail.

Los Angeles Superior Court Judge Peter Espinoza gave out the ruling and reportedly warned Neiers that it was the “last time we’re going to have this conversation.”

The reality starlet had previously gotten six months in jail and three years of probation for burglarizing the homes of Audrina Patridge, Lindsay Lohan, Paris Hilton and Orlando Bloom. After serving jail time earlier this year, she appeared on KTLA-TV to promote her reality show and stated that her time in jail had changed her.