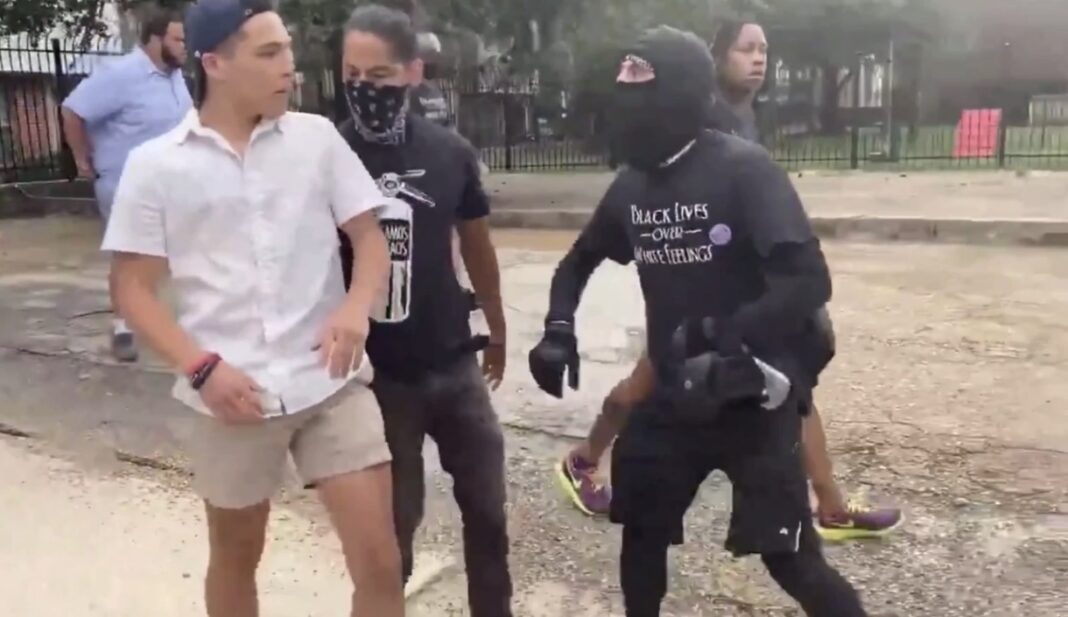 DALLAS, TX—September 5, BLM activists attacked LGBTQ+ members of the Walk Away Campaign in front of a Dallas police station.

The Walk Away Campaign encourages people to leave the radical left and “take back our country.”

The founder, Brandon Straka and his team do weekly rallies in democratic run cities. Their mission reads the following:

“The #WalkAway Campaign is dedicated to bringing Americans together to #WalkAway from intolerance and societal discord; to leave identity politics behind; and to walk towards unity, civility, respect, and the American ideals of life, liberty and the pursuit of happiness for all.”

During the Dallas rally, Straka confirmed that BLM activist, Dominique Alexander rushed the stage and put his fist into his security guard’s neck. As police showed up to arrest Alexander, he yelled for people at the rally to call police on the security guard.

Straka confirmed that police held his security for five hours at the station and when he and his team arrived to bail him out, BLM activists and news stations were surrounding the police station. They immediately bombarded the Walk Away team.

This was the most terrifying moment of my life. My team &I went to the police to check on detained security agent. 30-40 BLM began throwing bottles at us & chasing us. They stole my employee’s phone &smashed it. We had to run for 4-5 blocks. All Dallas news stations were there. pic.twitter.com/84ZWXtPo93

They harassed them for five blocks down the street until a dead end where police were. They threw bottles and street cones at them while trying to intimidate them. Video that was taken down from YouTube just a few hours after it was posted by Straka was posted again to Twitter. You can hear BLM activists screaming, “Why the fu*k would you come here you racists fu*ks?” They yelled at one member, “Put that fucking phone down!” right before it was smashed and broken.

As they walk faster per BLM demands, an individual yells, “Guess what? Trump don’t like you either bit*h. He don’t like gay people either!” As she screams at them for voting for someone who “doesn’t support them” another individual walks over screaming and pointing, “Why are you having a conversation, fu*king go! fu*king go!”

Walk Away was not antagonizing BLM, but in fact doing just as they demanded — walking away. That wasn’t good enough for BLM. When they weren’t moving fast enough, they were physically attacked. Karlyn Borysenko of Walk Away starts to sprint toward the police at the end of street as BLM shouts, “You want me to show you violence? I will show you violence!”

Borysenko posted on Instagram when she arrived back at her hotel to explain how she felt after the ambush. As she is out of breath she said, “That was the most terrifying thing that has ever happened to me in my life.”

Borysenko didn’t think they would do anything with the police there. “They attacked us, were screaming at us, throwing sh*t at us.” She said, “A bottle hit me” and “they tried to steal my phone.”

With confidence she stated, “These people are terrorists. We did nothing to them except stand on the street near them and they came after us.” She said, “There are reporters that have footage that are refusing to release the footage.”

Straka was attacked before as well on August 27 at the Republican National Convention by BLM in Washington, D.C. as he was leaving with two people from his team, Mike Harlow and Libby Albert. He said, BLM “hurled homophobic slurs” at them, spit in their face, hit them and threw a drink on them.

Despite the physical and verbal abuse Walk Away has experienced with BLM activists so far, they are hopeful. Borysenko said after her attack in Dallas, “Let’s keep going.”