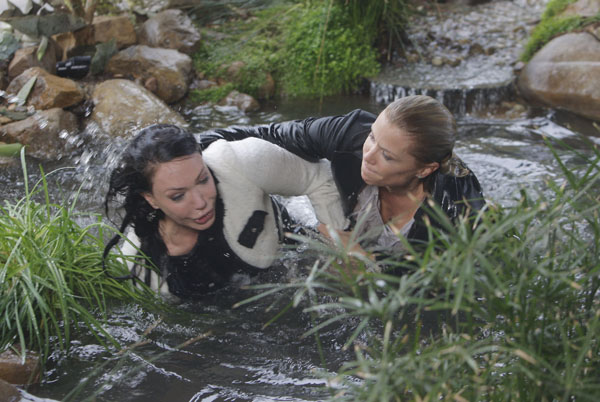 HOLLYWOOD —In 1983 millions of fans world-wide enjoyed the highly anticipated Lily pond cat fight between Krystle and Alexis on “Dynasty.” On February 26, on CBS, “The Bold and the Beautiful” beauties Brooke and Taylor ended up in the CBS TV City koi pond on Beverly Boulevard thanks to their magnificently talented executive producer and head writer Bradley P. Bell. That’s right, Taylor and Brooke after over two plus decades of calling each other names will finally make TV history and become the queens of soap cat fights. Taylor is portrayed by the amazingly beautiful Hunter Tylo and Brooke by the equally beautiful and talented Katherine Kelly Lang. This week on Monday, March 1, expect the battle that began on Friday to escalate to all out war between the two Mrs. Ridge Forresters.

Brooke has been known as the sexpot of Beverly Hills who has also been a fashion industry executive at the esteemed Forrester Creations for years. While Taylor is one of the most renowned psychiatrists in the world and resides at UCLA Medical Center or University hospital as it’s called. What these women have in common is both have vied for the attention of the biggest Bel Air playboy in television history, Ridge Forrester. Last week Ridge and Taylor’s conniving daughter Steffy gained control of Forrester away from their family’s nemesis Bill Spencer and fooled him into believing he was selling the company back to the Ridge and Eric Sustainable Trust. In fact it was being sold to Ridge, Eric Stephanie and Taylor. That’s what Steffy meant by [REST]. Both Stephanie and Taylor are the ex-wives of Eric and Ridge respectively. The husbands’ current spouses Brooke and Donna are none to happy to be shoved out of their company, but the Logan sisters found themselves on the losing end of a plot to regain control of the company, while Brooke has put in long and painful decades of hard work into building up the fashion house.

Her longtime enemy Brooke believes Taylor has absolutely no business being involved with Forrester Creations. Much like Krystle and Alexis’s famous water battle, fans are split evenly between who they want to come out victorious. Lang enjoyed dunking Tylo but it was all in fun. The two actresses are consummate professionals who only hurled fists and angry words when the cameras were rolling. Braver than their counterparts, Collins as Alexis used a stunt double in her infamous 1983 cat fight with Evans, while Lang and Tylo filmed the sequences themselves in private and the upcoming cat fight has fans online buzzing about who the winner will be. Take it from me, the fans are the winners in seeing such a brilliant storyline. Both actresses are also considered winners while working on the most watched show on the planet and both laughed after filming was completed.

“B&B” behind the scenes geniuses managed to clean out the pond before the two highly sought after actresses entered. Then shooting started, during a heated argument Taylor shoved Brooke into the koi pond only to be pulled in by Brooke immediately after. Be sure to watch “B&B” this coming Monday, on March 1, for the spectacular water battle between the talented and sexy babes of daytime. Hunter Tylo as Taylor and Katherine Kelly Lang as Brooke will be fighting for years to come thanks to the powerful and talented wizardry of Hollywood legend Brad Bell who makes “B&B” more exciting than “Dynasty” ever was.

One of the few people allowed on the private set was JPI’s shutterbug Sean Smith who took these exclusive photographs for Canyon News readers.  Be sure to watch Monday’s episode, here’s a clip! B&B Promo 2/23 Taylor & Brooke Catfight! Video
All Photographs are Courtesy: Sean Smith at JPI Studios in West Hollywood. All photos of Hunter Tylo and Katherine Kelly Lang are the property of JPI StudiosÂ© and cannot be reprinted or copied for any purpose.