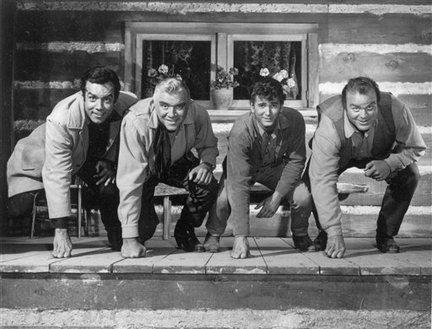 MALIBU—Actor Pernell Roberts died on January 24 at the age of 81. He passed away quietly after losing a battle with cancer. Roberts was a classical actor and starred on “Bonanza,” among other shows.

Roberts originally hailed from the South, and was in the Marine Corps as a youth.

Roberts was born in Waycross, Georgia in 1928, and maintained an active and varied lifestyle. When not starring in productions both on screen and on the stage, he also was a social activist who rallied against racial discrimination. He was an award-winning actor who had roles both on Broadway and off in such productions as “Macbeth,” “The Lovers” and “The Taming of the Shrew,” and was also a noted singer. He would begin acting on television over 50 years ago, in 1958 on the show “Whirlybirds.”

Roberts would later earn distinct acclaim in his role as brother Adam Cartwright on “Bonanza,” on which he starred from 1959-1965. He would go on to appear in over 200 episodes during his six seasons on the wildly popular Western show. The versatile performer would explain his departure as a reaction to what he perceived to be stagnant character development. He complained that it seemed unrealistic for a man of his age (significantly older than a teenager) to still refer to his father as “Pa,” describing his belief that he felt “like a damned idiot.” He called the use of the youthful dialog as “downright disgusting… I felt I wasn’t being taken seriously as an actor, and that’s like death to one’s talent.” He believed that in his role, he was “only able to use about one-tenth” of his acting ability.

According to the Internet Movie Database, Roberts’ last known television appearances were on “Diagnosis Murder” between 1994 and 1997, on which he played Dr. Elliott Valin. Roberts was no stranger to playing doctor, however: after leaving “Bonanza,” Roberts would go on to find great success on television once more, in the hit show “Trapper John, M.D.” Roberts stayed on that show for over 150 episodes between 1979 and 1986.

Roberts leaves behind a wife, Eleanor Criswell, and no children.