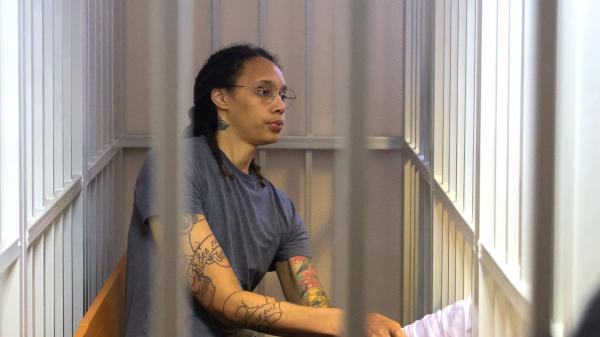 WASHINGTON, D.C.—After 294 days in a Russian prison, WNBA star Brittney Griner is returning to the United States after the Biden administration and the Kremlin agreed to release Griner in exchange for Russian arms dealer named Viktor Bout on Thursday, December 8.

“She is safe, she is on a plane, she’s on her way home,” declared President Joe Biden in a statement. Alongside Biden during the press conference was Griner’s wife, Cherelle Griner and Vice President Kamala Harris.

According to a senior administration official, Cherelle spoke to Brittney on the phone and hugged the POTUS while expressing her “sincere gratitude” to Biden and other officials who helped secure her release.

The U.S. government will send convicted international arms dealer Bout, nicknamed the “Merchant of Death” to Russia, after serving 11 of a 25-year sentence.

According to the Russian Foreign Ministry, the exchange took place at the Abu Dhabi international airport in the United Arab Emirates. In the next 24 hours, Griner will be flown to a military medical facility in San Antonio.

Griner, 32, plays for the Phoenix Mercury. She is one of 11 women to win an Olympic gold medal, an NCAA Championship and a WNBA championship.

In February, Griner who was playing professional basketball in Russia during the WNBA’s off-season was detained at Moscow’s Sheremetyevo Airport after authorities discovered canisters with cannabis oil in her luggage.

She pled guilty in July 2022, claiming she forgotten that the cartridges were in her luggage and was sentenced to nine years in prison. She was transferred to a penal colony named IK-2; hundreds of miles from Moscow. It has been described as one of the worst prisons in Russia, filled with 16-hour workdays, harsh conditions and military-esque rules.

Retired U.S. Marine Paul Whelan who has been in prison in Russia on espionage charges was not part of the prisoner swap.

“We have not forgotten about Paul Whelan,” said President Biden. Whelan’s family was told prior to Griner’s release, Whelan would not be part of the exchange. Biden assured Americans, “well we have not yet succeeded in securing Paul’s release, we are not giving up.”

“The Biden administration made the right decision to bring Ms. Griner home, and to make the deal that was possible, rather than waiting for one that wasn’t going to happen.”

Golden State Warriors player Steph Curry wished Griner a happy birthday while pleading for her freedom during the team’s ring ceremony in October.

“It’s just a happy day for me and my family,” said Cherelle Griner. “I’m going to smile right now.”