UNITED STATES−On Sunday, October 25, from 9 a.m. to 11 a.m. of Los Angeles, residents took part in what was advertised as a ‘Massive Car Rally.”

Cars, trucks, and motorcycles lined up in Redondo Beach. Participants kept to the right lane as they traveled single file down Rosecrans Avenue. Video footage shows a  caravan with no counter-protests or altercations. 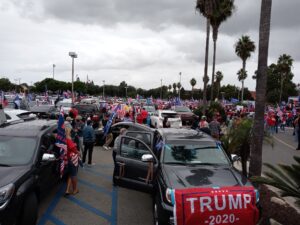 Advertising notices on Eventbrite asked participants to show up to the event dressed patriotically and to have their vehicles decked out with flags and signs.

According to reports, the Trump administration has started collecting food at many of the rallies. President Trump indicated at one of his last rallies that the amount of food donated was a year’s supply for the local food bank.

Crazy. We are still on Rosecrans in Manhattan beach and people are texting me from south Redondo beach 3 miles south! A long parade! #trump2020 @MakeMineADoubl2 @BillFOXLA pic.twitter.com/sJXIl2twxK

The group is calling for supporters who have been referred to as, “The Silent Majority,” to come out and make some noise for the President. The Long Island Trump supporters, now publicly refer to themselves as, “The loud majority.”

Have a GREAT “MAGA-GRAS” Rally today on our wonderful Long Island. Cut Taxes, Stop Crime, VOTE FOR TRUMP. Our City and State are a MESS. What do you have to lose? Thank you!!!

Authorities detained, Marcelo Almanzar, 20, who was alleged to have been waving a gun at the crowd. He was arrested for carrying a concealed weapon and carrying a loaded firearm.

Almanzar was traveling with rapper Offset,, whose real name is Kiari Kendrell Cephus. He is married to rapper Cardi B.